Advent Has Arrived {My Sunday Best}

Typing out a quick post to link up with Rosie for My Sunday Best!

I thrifted this dress a couple of weeks ago and was so happy it fit (thrifting gamble- not trying on in store) and was a good length (why are dresses so short?). The orange color is a bit tricky since I feel like pairing it with black would be too Halloween-y, so riding boots were the order of the day.

Yesterday I pulled out our window candles, faux greens, Advent wreath, and the toy nativity set from storage. When Audrey woke up from her nap she danced around and declared, "This is the BEST Advent evah!". Such a nice reminder that it doesn't take much to make things special for kids. :)

Hope you have a peaceful first Sunday of Advent!
7 comments:

On Saturday the two older girls plastered Pinkalicious stickers on their bedroom wall. Tim said they had set up an entire scene but I didn't look at it because I knew I would be the opposite of gracious and merciful about the situation. I am so anti-stickers on things other than paper or clothes- they must have known. Then today Evie took scissors to some of Audrey's hair and now Audrey is sporting a random lock of very short hair on the right side. Why??


It *has* been over a year since this happened, so I guess there was pent up mischief just waiting to pour out in some form or other. 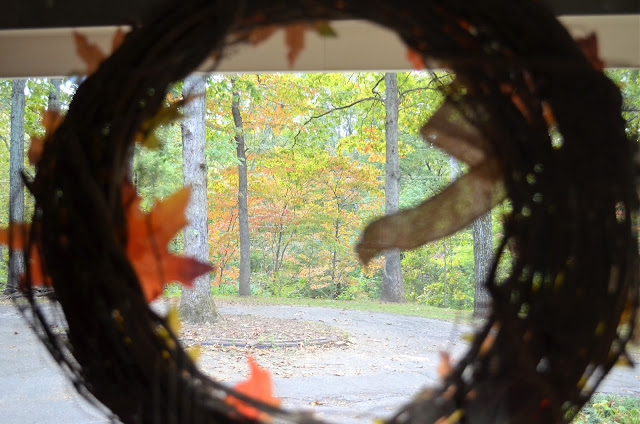 Cora just turned five months old and I feel like she is so big already! She and Heidi wear the same diaper size now and I'm gathering the nine-month clothing to put her in.

I had to take her to see a specialist recently because our family doctor was concerned her anterior fontanelle closed prematurely. Thankfully the specialist doesn't think it's a problem and hopefully the follow-up in three months will have the same outcome.

While I was walking around the hospital trying to find the right department, though, the muslin blanket I use for a nursing cover fell off my bag and I didn't notice...so if you're ever wondering how to get comfortable nursing in a mostly-full waiting room, that's one way to do it (although I don't recommend it!). (At the very least I had some cover with the Ergo awkwardly slung over the front.) 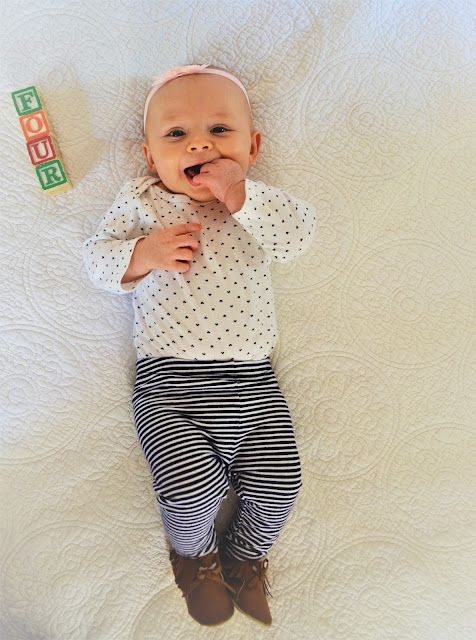 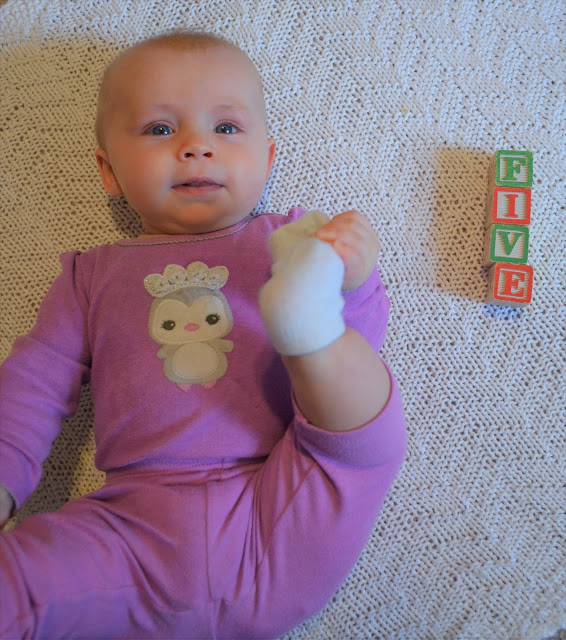 .......
I'm almost finished with my Christmas shopping which I'm hoping to wrap up (ha!) before Advent starts. The thing is, I have always loved Christmas shopping and it never used to bother me when I still needed to shop for gifts even days before Christmas, so I was thinking about why it's become such a big deal to me the past several years. I've concluded that: A. I just don't have the free time to devote to it like I did before kids, B. between parenting, doing the Advent things, and Christmas prep, I have no.more.mental.energy, and C. I need peace in my life.

If gift shopping needs pop up before Christmas I feel all: 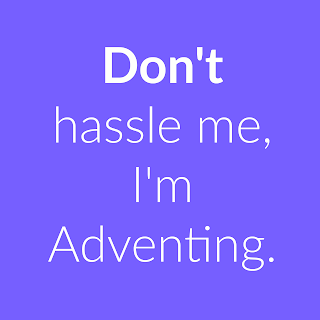 
Speaking of Advent, I recently found out about a version of "Gabriel's Message" sung by Sting and I completely love it (the video is kinda kooky but the song is so pretty to listen to). Hansel sums up my feelings about Sting's music well:
"Sting. Sting would be another person who's a hero. The music he's created over the years, I don't really listen to it, but the fact that he's making it, I respect that."
.......
Last week I popped in to a resale store for a quick gander and was excited to find a an inexpensive mirror that just needed some spray paint on the frame. Luckily the weather was balmy and sunny and amazing, so I was able to paint it while Cora took a short snooze. It now hangs it in Evie and Audrey's room (where it's too high for them to use- oops!): 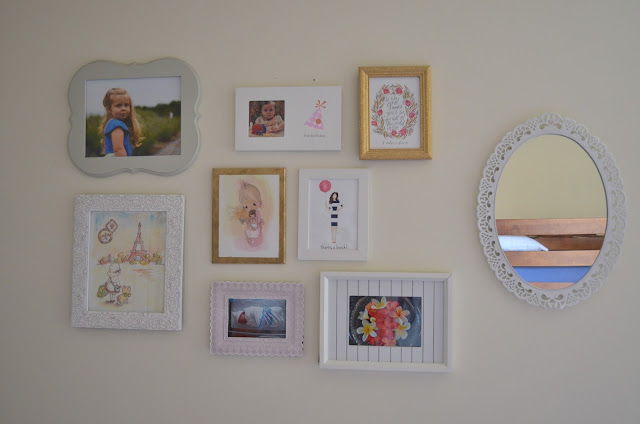 And silly as it sounds I was so grateful for the whole "project" because things like that breathe life into my life. Some days are so filled with dishes, driving, changing diapers, meal prep, barely keeping the house out of the disaster zone, etc. and they run into more days of the same. I begin to feel like a shell of myself and I need "me" things to balance it all out.
.......
For good measure here are some pictures from a Halloween party we went to a while back: 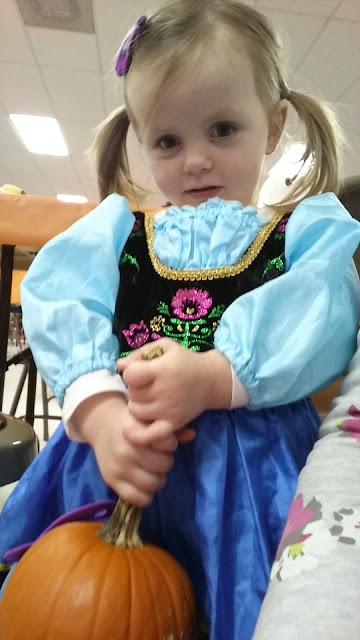 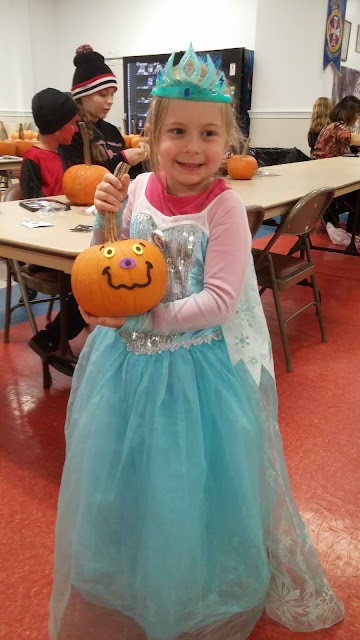 A Couple of Songs for Election Day

Last night I got sucked into reading a lengthy comments section of a political piece written by a Catholic (I couldn't look away!), and was quite saddened when I saw two commenters write something along the lines of, "I'm not Catholic but I'll never convert after reading these comments/ if this is the way Catholics treat each other". YOWZA.

Obviously this has been a rough election season (understatement!) for all, with lots of mudslinging fests breaking out everywhere.
The song "Rise Above It" popped into my head last night and I think that's a perfect line to keep in mind today. Definitely not in a snooty, "I be totally right" way, but in a "keep praying and channeling our efforts into working for what's good and true" way. God has the victory!
So, I give you:
Because, Cool Runnings, mon.

Also, these lines from "O God Beyond All Praising" seem fitting for today:


and whether our tomorrows
be filled with good or ill,
we'll triumph through our sorrows
and rise to bless you still:
to marvel at your beauty
and glory in your ways,
and make a joyful duty
our sacrifice of praise. 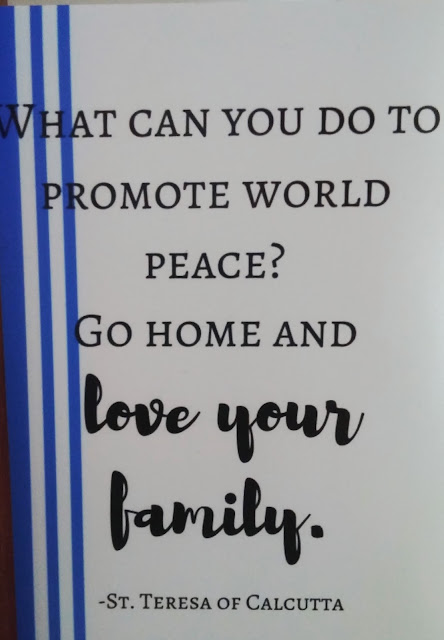 Linking up with Kelly!

1.
As I write this I'm inhaling the scent of mothballs with each breath and think I might die. Recently we've had mice in our cars (again!) and our car mechanic said they don't like the scent of mothballs (guess what- neither do humans), so he suggested putting some in panty hose to hang under our cars. Now, if you sit too close to the garage door you get a nose-full.
If I ever happen to park next to your car I apologize in advance for the nasal assault!

2.
We had a really nice Halloween- joined family for pizza beforehand and then trick-or-treated in my parent's neighborhood. There's a fair amount of people from our church and school community who live there, so it's great to go to houses we know or see familiar faces when we're out begging for candy.
Our costume theme this year was: princess dresses from the dress-up box. ;)
Cora had a cute Halloween outfit on earlier but pooed out of it, like her sisters before her have been wont to do on holidays. C'est la vie.
3.
Some seasonal book love:
Sleeptight Farm: A Farm Prepares for Winter- Such a cute book for fall and winter, and I love the illustrations. 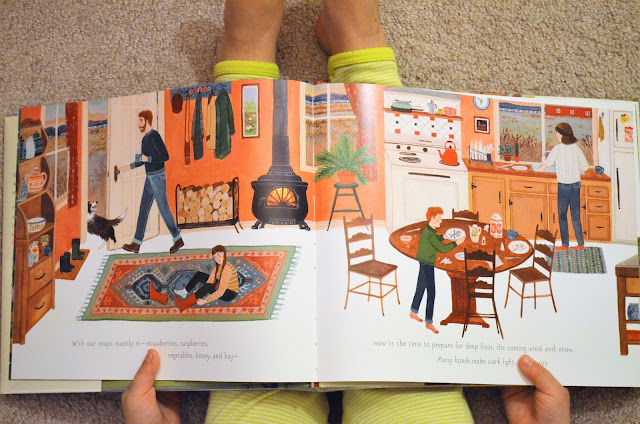 Christmas in Noisy Village- I borrowed this from our library since they didn't have Children of Noisy Village, and it is so delightful I can't wait to borrow it again come December. It's a picture book (not chapter like I think the first one is?) and a charming look at Old World Christmas traditions. 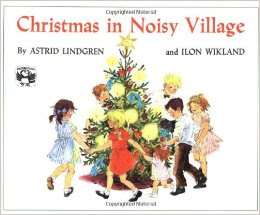 4.
Watching: The Durrells in Corfu
Set in the 1930s and about a British family who heads to Corfu for a fresh start. We've only seen the first two or three episodes but so far, so good! And that scenery!


5.
Lately I've been thinking about what's saving my life right now à la Modern Mrs. Darcy. First up: white baby socks. All the baby socks I've ever purchased have had some sort of color on them- you know, flowers, all pink, shoe socks, etc.- so over the years we've amassed a quite a good amount of itty bitty unmatched socks. And the ease of having them all be the same color is such a glaringly obvious and simple thing I can't believe it's taken me this long to figure out.


Also *sort of* saving my life right now: organization solutions for doll clothes and shoes.
There's been really no set place for the girls' doll clothes to get put away which leads to doll clothes scattered hither, thither, and yon. All along we've had that little pink set of drawers but no set use for it use and the low bar in their closet not in use either (crossing my fingers no one decides to hang on it). One day I decided to see if the little doll-dress hangers fit on the bar and- they did! Then I realized the pink drawers were a perfect size for little clothes, so problem solved. 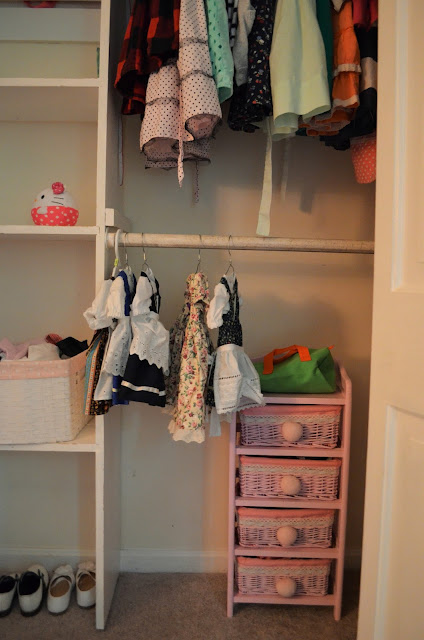 Same thing for the shoes in our family room- in need of a storage solution and the basket answered. 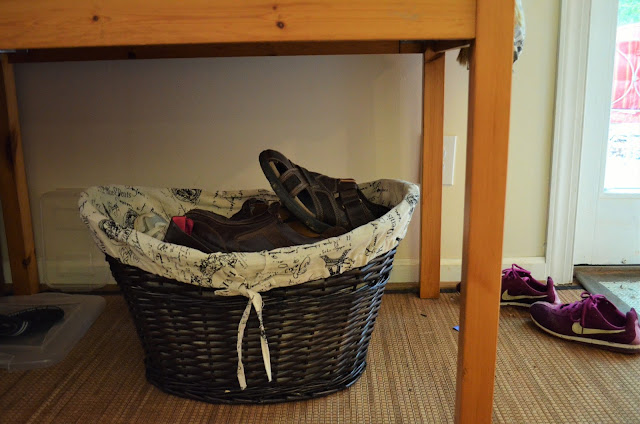 Now if only there was a way to keep everything put away. ;)


6.
All the fall leaves are hitting their peak right now and it is SO beautiful! I want to pull the car over every other minute to snap pictures of all the gorgeous color medleys. 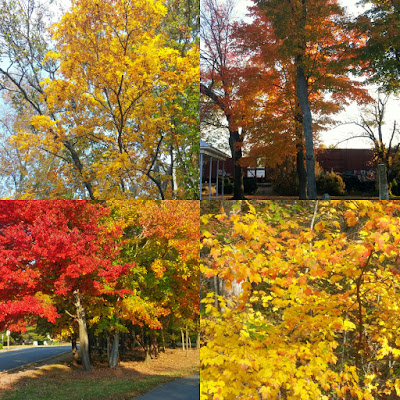 7.
Here's a laugh for your Friday: 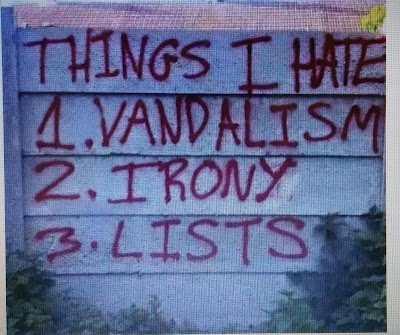 I saw this on Instagram; I want to be friends with whoever wrote that!

How NOT to Take Decent Photos of Your Kids

Disclaimer: I am not a professional or even an amateur photographer and all suggestions are solely based on my experience.

Tip #1: Try to dress your kids in coordinating clothes.
Clearly the two-year-old knows that's an absurd notion and will make a stink over your chosen outfit.

Tip #2: Suggest the nice-looking brown boots for said two-year-old's photo footwear.
Obviously the gaudy Hello Kitty boots will be a much bigger draw, resulting in tears which will then lead to socked feet in all the photos. 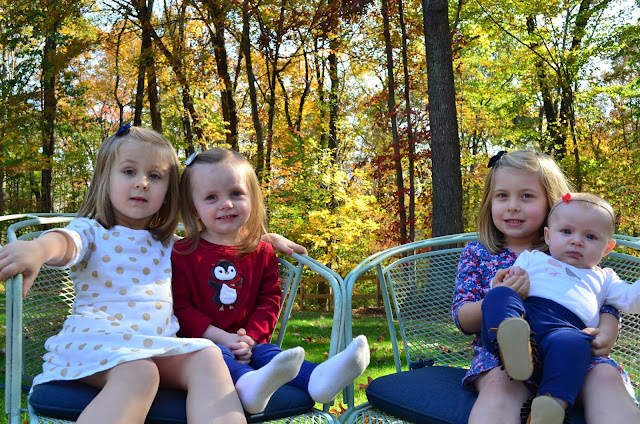 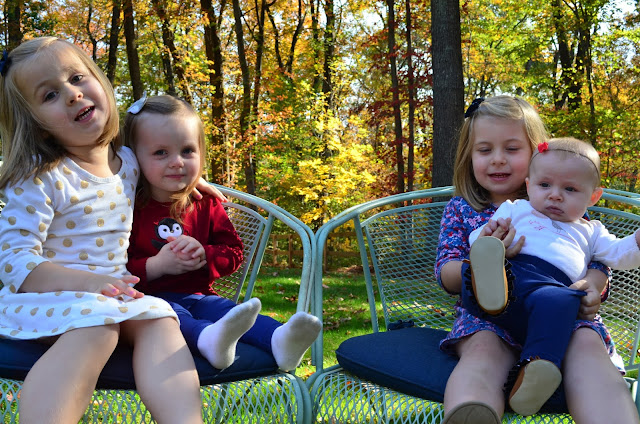 Tip #3: Insist on taking the photos. Keep on pushing even if you have an inkling to stop after the first power-struggle.

Tip #4: Take the photos on a beautiful, warm day with vibrant fall leaves in the background.
Best to pick a day that's rainy and dreary as that will surely jive better with a certain child's mood.

Tip #5: Position the chairs so there's a large gap in the middle:
Tip #6: Ask your kids to smile. 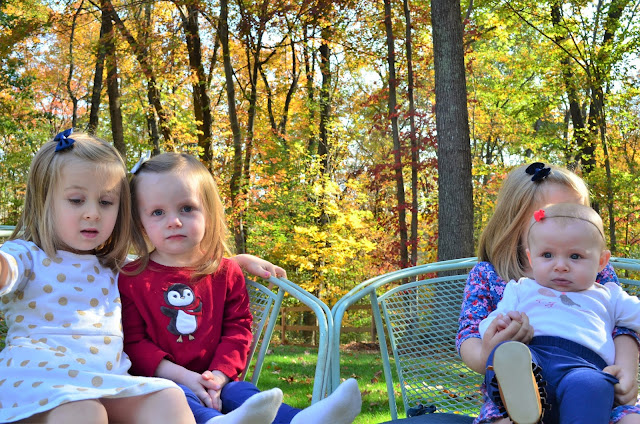 Tip #7: Ask them to smile a normal, natural, everyday smile. 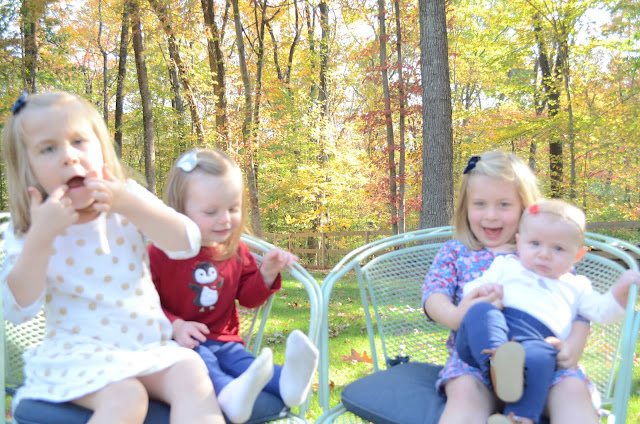 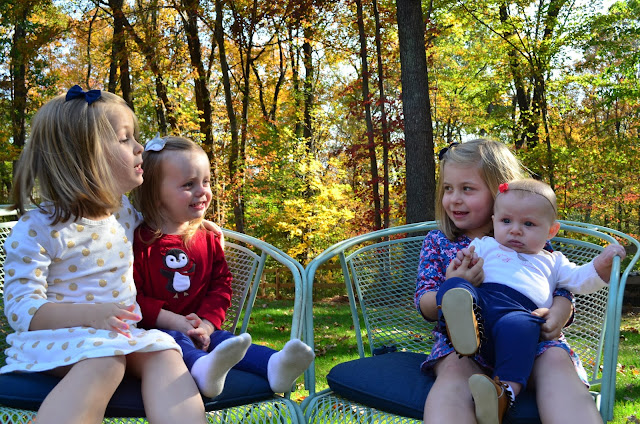 Tip #9: Never learn how to shoot in manual and then pick a setting on your camera and snap away without checking how the photos are turning out. 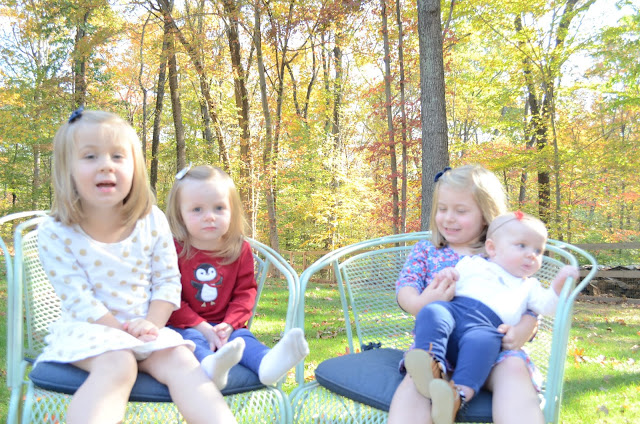 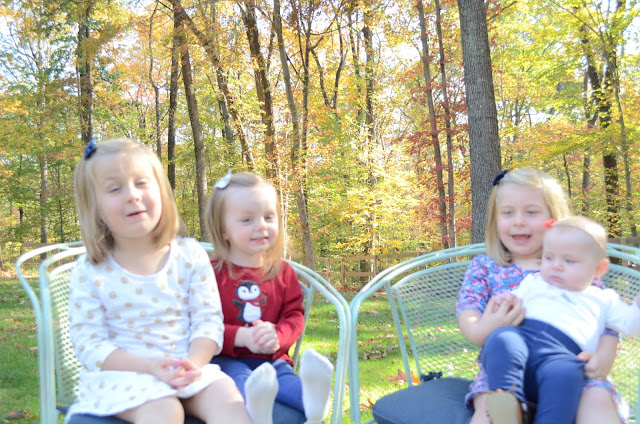 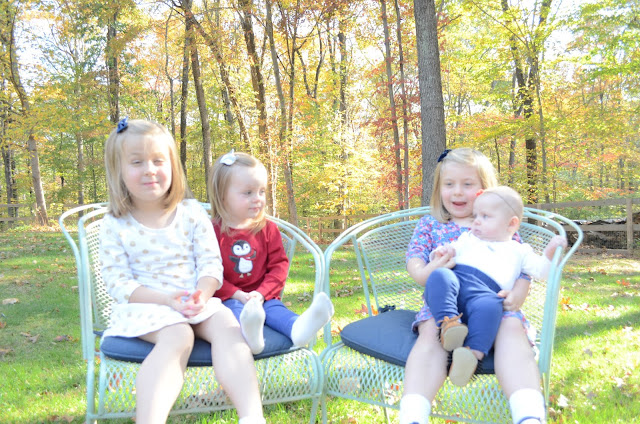 Tip #10: Make sure you're the only adult around so there's no help when the baby spits up. 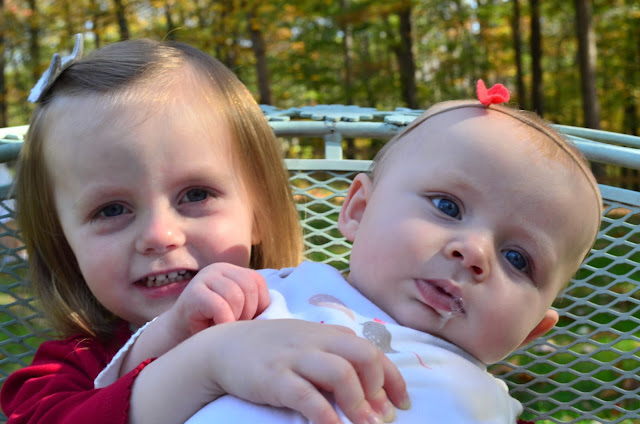 That should do it!
7 comments: