This past Saturday I had the pleasure of attending a blogging conference (Catholic Women's Blogging Network Mid-Atlantic) hosted by Ana and attended by such a superb group of Catholic women. It was great to see familiar faces, enjoy good conversation, and meet new people, plus mimosas and delicious catered food. :)

For me the day was a perfect blend of well-put-together but low-key, if that makes sense! Hearing woman after woman aver that posting to their blogs was sporadic was certainly relatable- if you're in the same boat, know you're not alone! 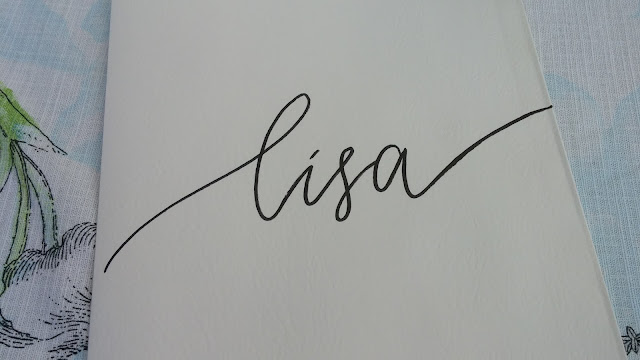 (I didn't take many photos and my phone's camera isn't Ansel Adams quality anyways, so.) 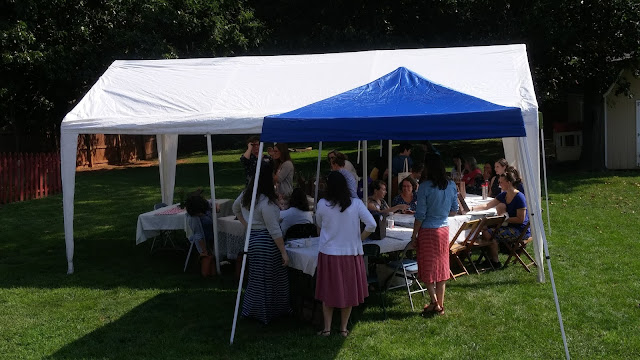 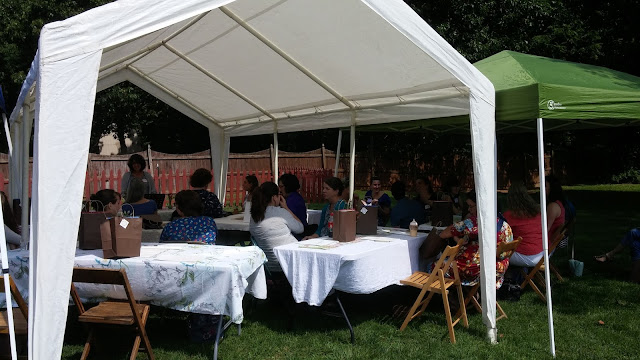 The majority of the conference was held outside- the weather was amazingly perfect for August in Virginia. Elizabeth Foss, Kelly Mantoan, and Mary Lenaburg all gave wonderful talks (if you're looking for a speaker for a women's gathering/ group/ conference in your area I highly recommend any of these ladies!); after hearing each of them speak I totally felt like Honey from Notting Hill:

But truly, the talks were so refreshing and inspiring, and have given me a lot to think about. Before the conference I kept praying the prayer to the Holy Spirit and asking God to speak His truth over me and I feel everyone there was blessed with the words of those women! 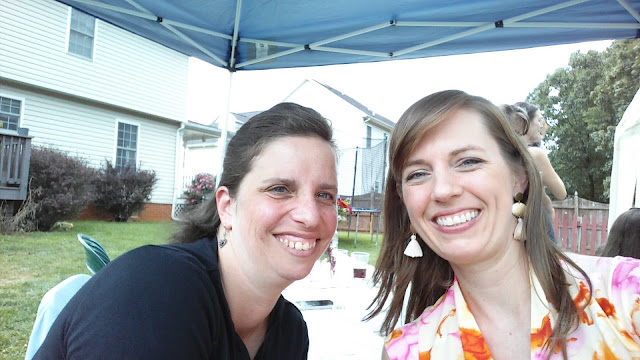 It was great to see Joy again and catch up ^^^ 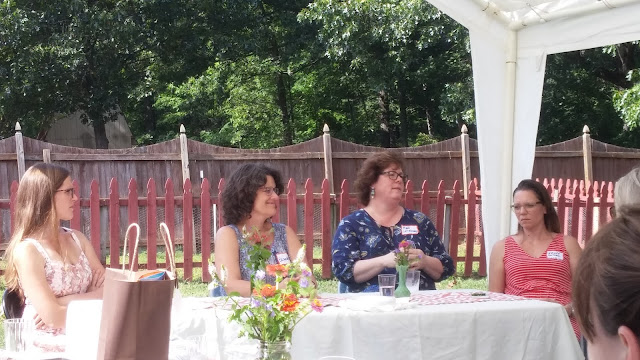 At the end there was a Q&A panel which wrapped up the day.
Here's hoping many more of these gatherings will pop up around the country! 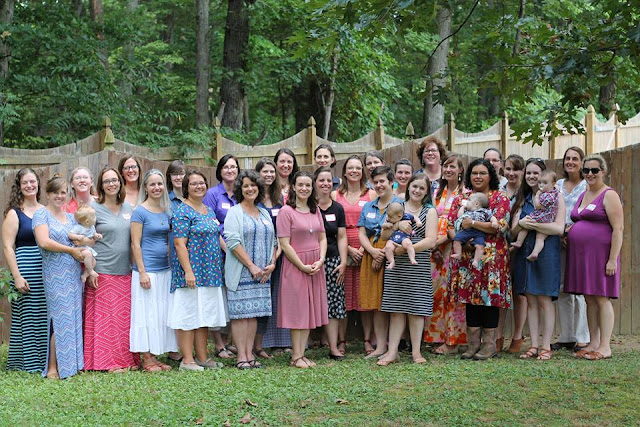 Evie has had a momentous August- she turned six AND lost her first tooth on her Baptismal Anniversary which was the day of the solar eclipse! Big stuff!

Luckily I had a dollar coin in my old coin collection, so the Tooth Fairy did not have to leave an IOU.

On Evangeline's birthday Tim procured donuts for an early breakfast and then my mom took her out for a special breakfast at "Ash-tawn Restaurant" where "the apple juice was so good!" (haha, a taste of the forbidden undiluted fruit). Later I asked her what she ordered and she told me- eggs with cheese and ham. With potatoes? No. Biscuits? No, just eggs with cheese and ham.
She knows what she likes. :) 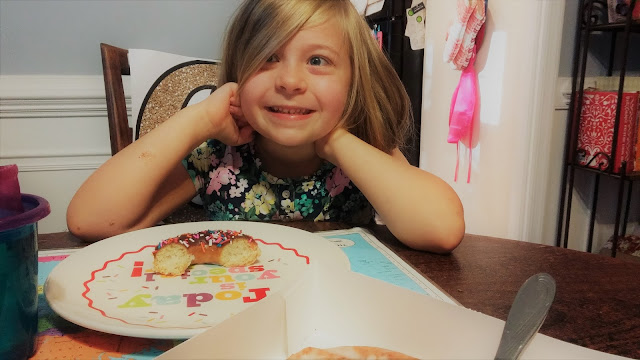 A few days later we celebrated with my family. We had cheeseburgers and hotdogs, per Evie's request. 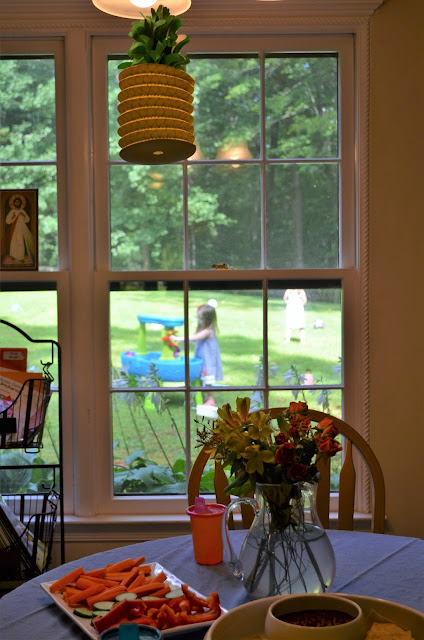 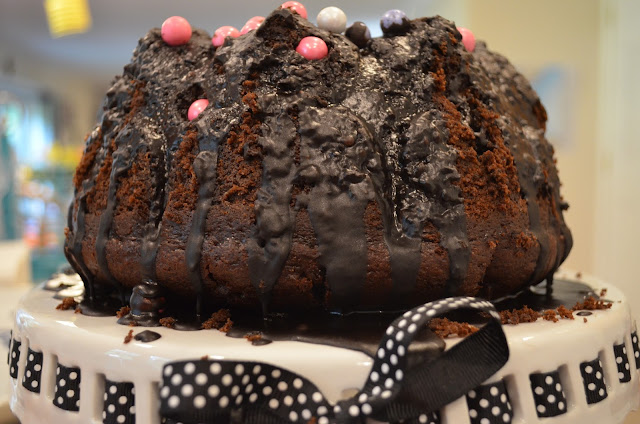 She is often talking about making a lemonade stand, so I pulled out this sign below that I used for her first birthday! 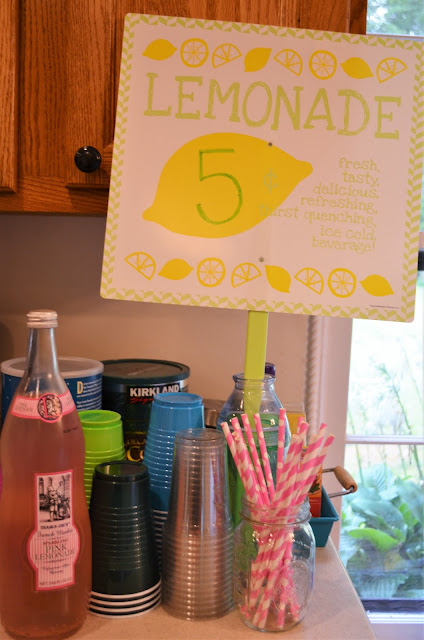 The highlight of the party was the piñata my sister made, which the girls were full of excitement about. The thing is, they just don't have a lot of practice whacking things with or without bats; remedial P.E. might be in our family's future. My dad ended up taking a few good swings to bust it open and we all had a good laugh. 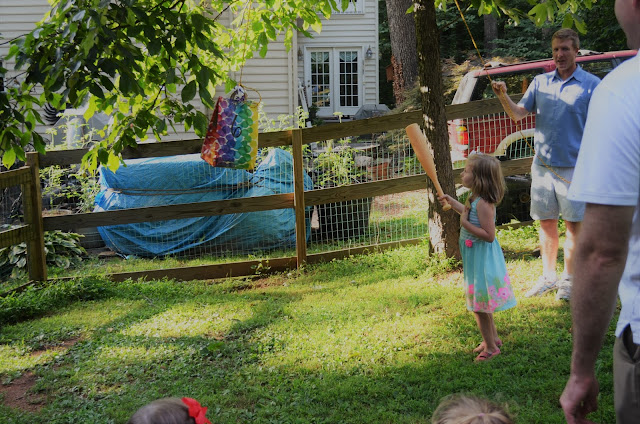 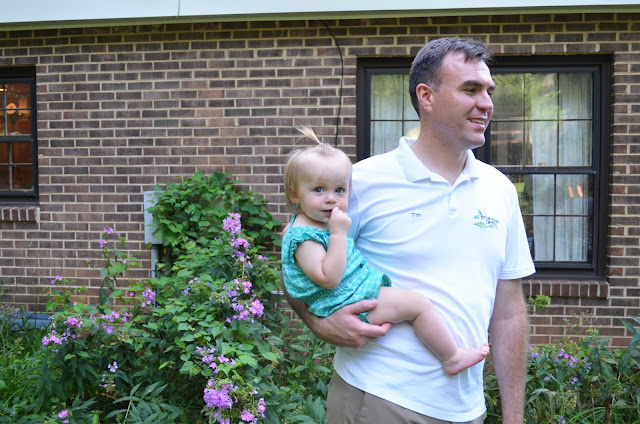 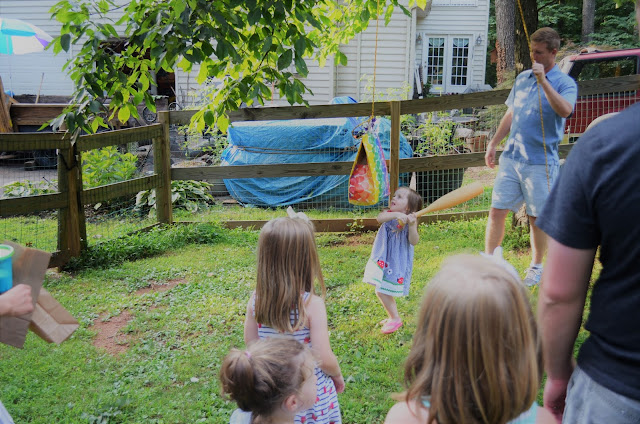 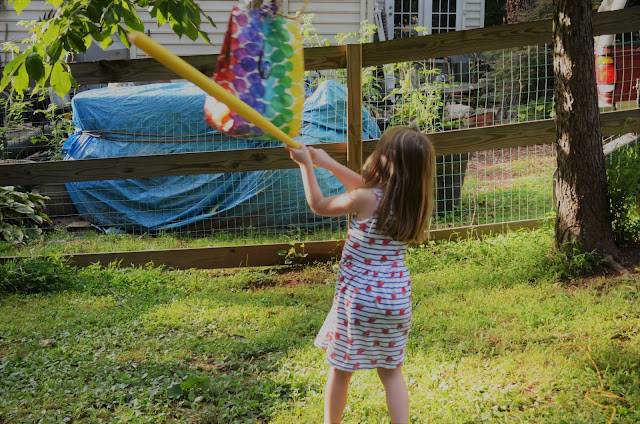 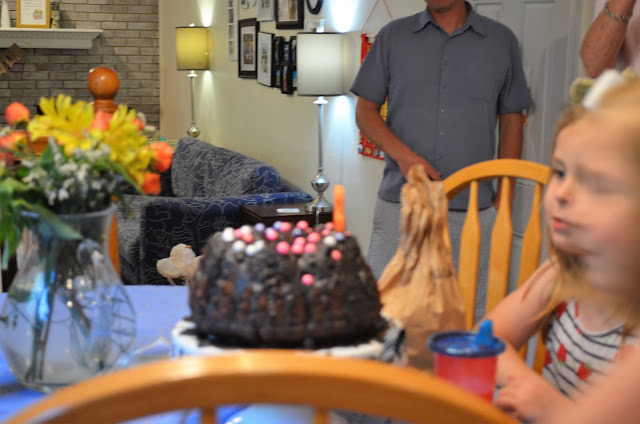 This was the only shot I caught of blowing out the candles- I forgot I had misplaced our stash of little cake candles and all I could find at the last minute was a 0,1, and a 3. Tim saved the day by coming up with the idea to use the 3 and light it twice- math problems ftw!

One of the things I love about Evie is how much she relishes every aspect of a celebration. She had so much fun both days, and kept talking about the breakfast out with my mom. Here's hoping six is a wonderful year. :)
2 comments:

I was very grateful to be able to attend the Edel Gathering in Austin this past weekend. Tim valiantly  and seamlessly held down the fort at home while I flew out to meet my sister and sister-in-law for a girls' weekend. We were all able to leave a day early (Thursday) which was the best decision- having that extra time to relax, explore the city, and do everything at our own pace was SO nice.

Knowing my flight was arriving first, three hours ahead of my SIL, and several hours before check-in at the hotel, I thought I'd be adventurous and venture out to at least one thrift store to kill time. (I did some Googling beforehand and it looked like only one was in reasonable walking distance to the hotel.) And I thought I'd be frugal and take the public metro bus (only $1.25!) since I wasn't wild about shelling out the $15 for the Shuttle bus, or $30+ for a taxi- who cared if the ride took a little longer?

YOU GUYS. I have never said so many prayers in a row to St. Michael and my Guardian Angel in my life! As soon as I boarded the bus I knew my carry-on and I stuck out like a sore thumb.
The people behind me were dropping the F-bomb like the word "the", many a disagreement was being shouted for all to hear, and at one point the guy in front of me was discussing his being out on parole with the girl across from him.
We drove through and stopped at super-shady areas of town, and after about an hour made it to the transit station- a roofed area with some benches and vending machines covered with bars. I had NO idea where I was. My brief discussions with the driver and info lady at the airport led me to believe I'd be within walking distance to the store, but after studying the (super confusing!) bus maps several times, I realized I still had a ways to go. I seriously considered walking out of there instead of waiting for another endless bus ride of unpleasantness, however this "station" was surrounded by highway and I knew the only way out was by bus (also, gotta love people smoking all over when there are no-smoking signs all around)! Edel felt like such a distant event; some hazy dream in another lifetime. After about a forty minute wait, the bus I needed to get me close to the hotel (forget my crazy plan!) arrived and we slowly made our way into town. I actually missed the stop I needed, as on the map it looked like there would be one more stop even closer, and felt the biggest sense of dread and despair when the bus crossed a bridge heading away from the city! I was going to be riding these buses forever! I immediately pulled the cord to get off at the next stop and began my trek back across the bridge, suitcase in tow.
I don't mean to sound like some privileged snoot- but I was completely out of my element through all of that. To spend my days mothering four young kids, leaving the house mostly for the grocery store, library, post office, and the like, and then suddenly find myself on some crazy trajectory, then standing alone at a rough-looking bus stop in a city utterly unfamiliar to me...it felt like I was in some movie!
via
Anyways! I eventually met up with my SIL (the bus escapade ended up being over two hours), then sister, and that first night we walked around for a bit and found a place to eat. The next day we slept in as much as we could, found a place for brunch, did some more exploring, a little shopping, and spent some time at the hotel pool. It was kind of funny because there were (several?) bachelor and bachelorette parties at the hotel that weekend and the pool was packed. And here we were- moms of young kids, so far removed from that scene, just swimming in the middle of the groups. :) 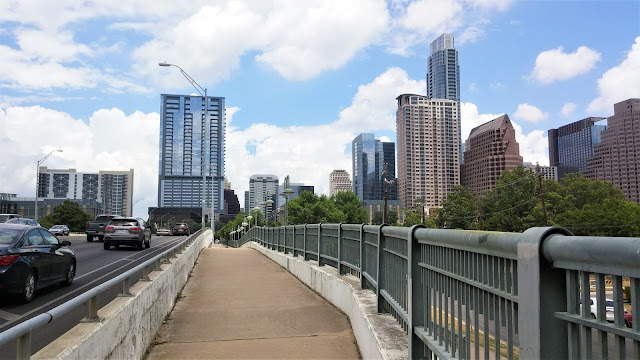 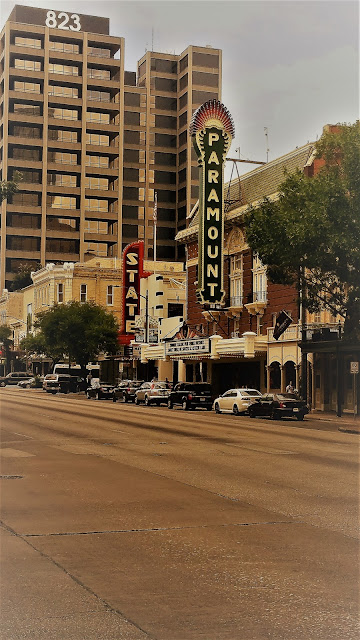 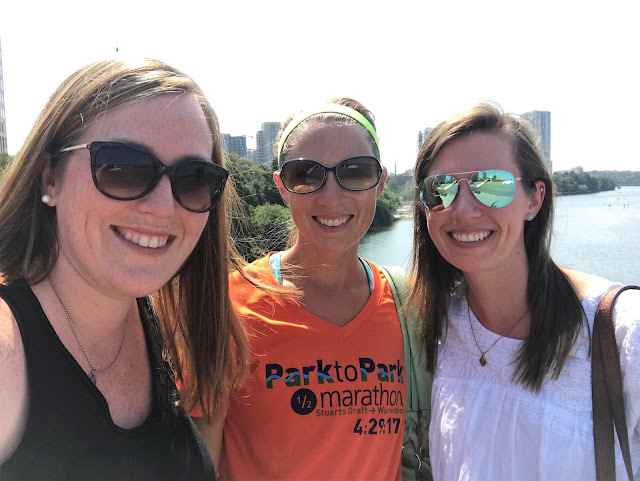 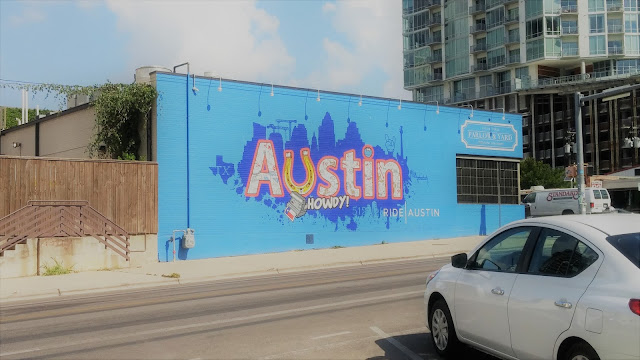 The first night of Edel was the Crazy Shoe Party- and there were for sure some crazy ones! It was fun to see all the creativity and gather with ladies from all over the map. 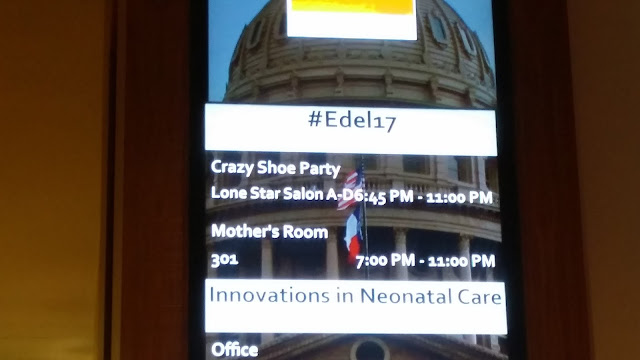 Before they announced the winners we ran out to a nearby bridge packed with spectators to glimpse the bats that fly out every night- apparently there are 1.5 million that fly out from under the bridge every night! It was quite a sight and there was such a pretty sunset to boot! 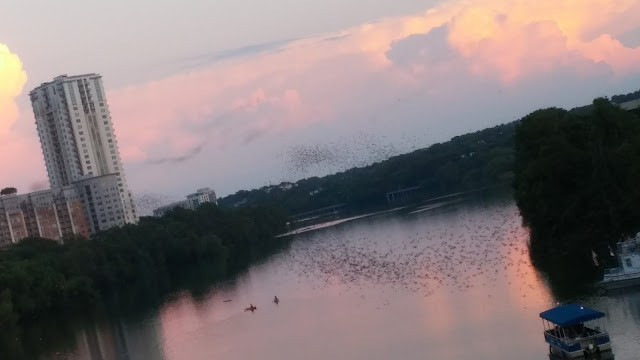 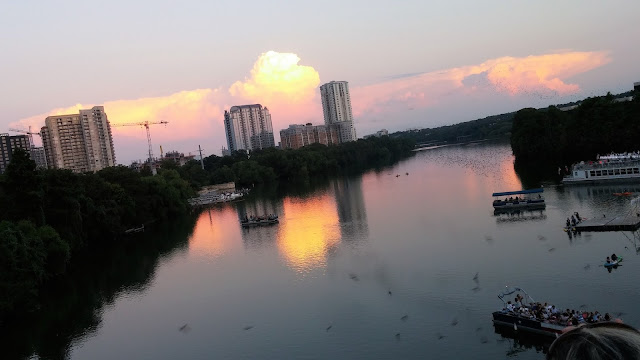 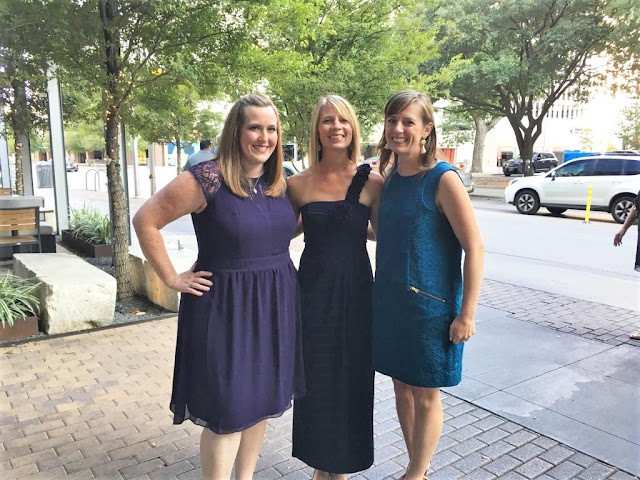 After the winners were announced back at the party we headed out again in search of dessert. The Italian place we went to had such a great sounding menu that we went back the next morning for brunch (give me all the Eggs Benedict). Austin for sure has no shortage of great places to eat! 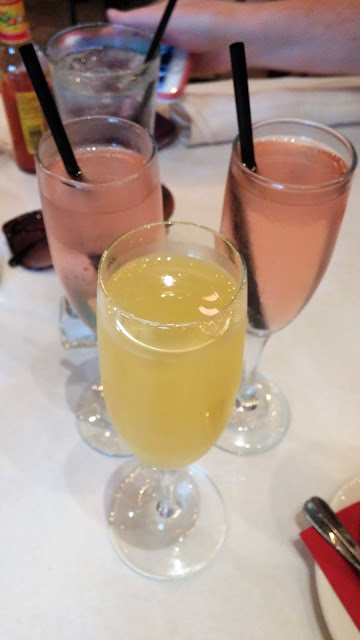 The next day was the main event. We perused the vendors after check-in (so many wonderful artisans! It was a whole group of awesome Etsy shops gathered in one place- be still, my wallet.) (I'll try to list and link them later), and then listened to a great talk by The Evangelista (The Waiting is the Cross text version HERE!), had some more free time to visit vendors, had a snack of scones and fruit, and took advantage of the free back massages. 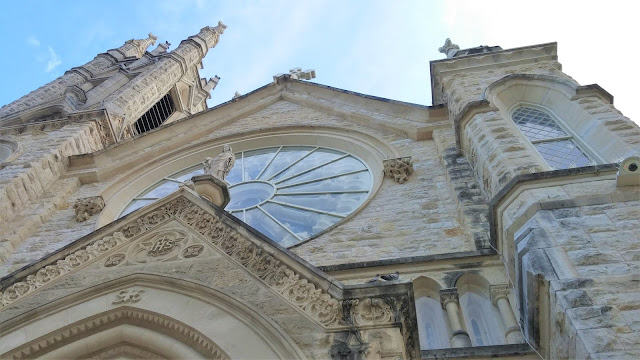 The next talk by Angie Neumann of the Catherine of Siena Institute about Charisms really, really hit my heart (Charisms are gifts used for others that you receive at the moment of your baptism, everyone has 2-6, always for the benefit of others, extraordinary effectiveness, help you to avoid burnout, etc.)  I would love to learn more about them and discern what mine are!

That evening we walked to St. Mary's Cathedral for mass, then went back to the hotel for the evening dinner, talk, and festivities. Dinner was one of those meals where everything was SO incredibly good and each dish had a different spin on its "usual" preparation. Mary Lenaburg was the keynote speaker and did a phenomenal job. After that was dancing and karaoke, which admittedly we didn't stick around long for, but we did do the photo booth and laughed like we had had more than one drink each (moms gone wild). And we got a selfie with Jen- she took it!! She and Hallie are just pure awesomeness. 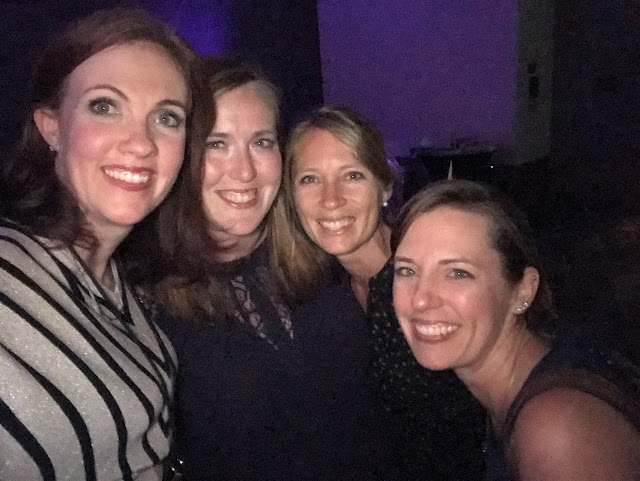 We all had 7am flights the next morning which was a literal rude awakening after a weekend of fun.
Also, the theme of strange transportation continued with our Uber ride to the airport:
A younger man picked us up, and seemed nice enough until he began talking about how he didn't like Waco. "They have anti-pornography billboards", he said. "Who does that? What is this, the 1920s?! They spent money on that- there are homeless men sleeping below them, why don't they just give the money to them?!" While I agree that it's important to help the homeless, us three girls were floored at what we had just heard! None of us knew what to say, and we couldn't believe that he went on an anti-pornography rant in front of three women!  I just said silent Hail Marys and was so very thankful when we arrived at the airport minutes later. I have more to say about that but Jenny hits the nail on every head.

I missed my family but all-in-all it was so great to have some prolonged girl time and three days away from home.
I hope Hallie & Jen continue to host Edel events and that many more women are able to go!