On Sunday we celebrated Evie's 7th birthday! Her actual birthday was on Thursday- we opened presents that morning, then went to the Farmer's Market (shared the most amazing glazed donut), and had cupcakes that night after her birthday dinner.
Evie has been really into her Lego's lately, and eagerly asked to go to the Lego Club at the library when she saw a flyer for it during a visit. We were able to make it happen and she had a great time! 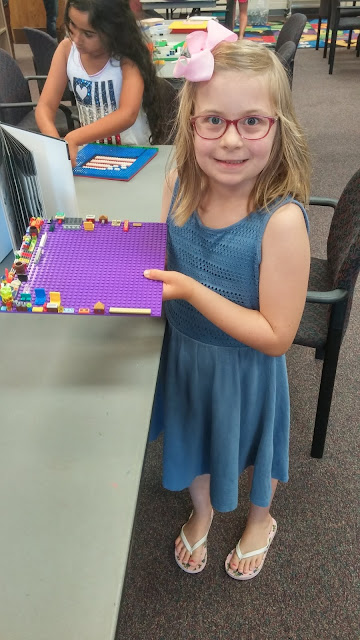 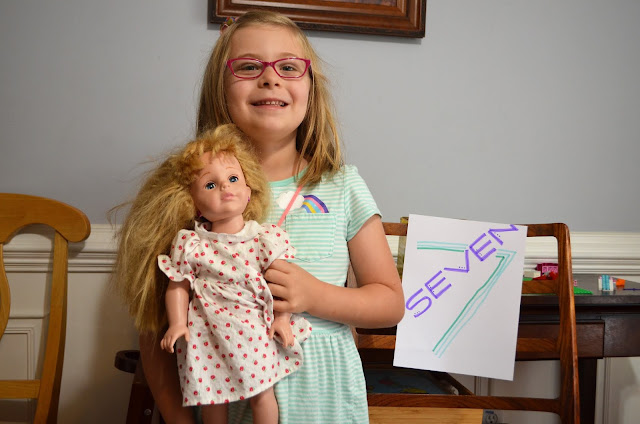 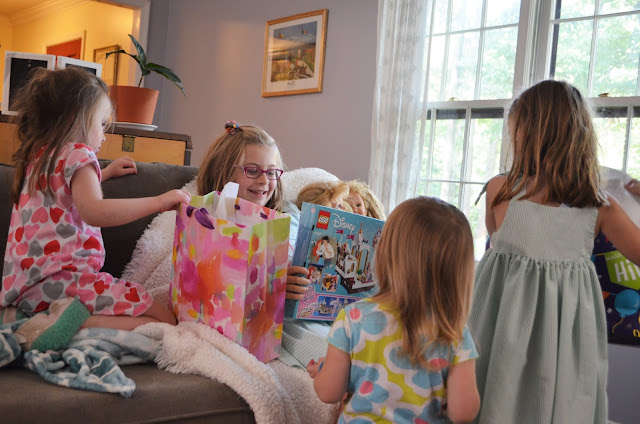 We had a family celebration on Sunday, which was lots of fun, and her big present was a new bike! 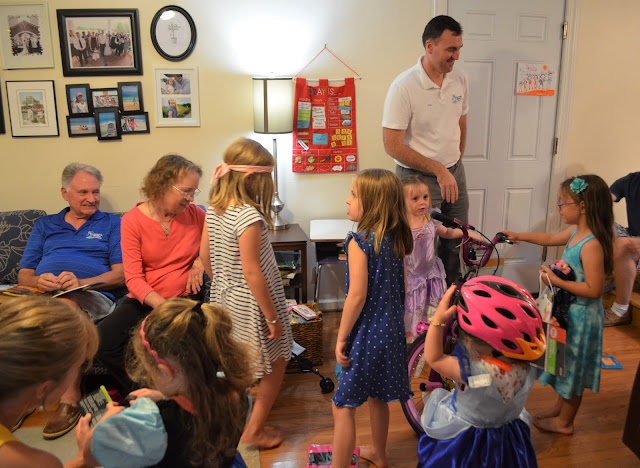 Cora wanted a turn on it and was NOT happy when we put it back in the garage. 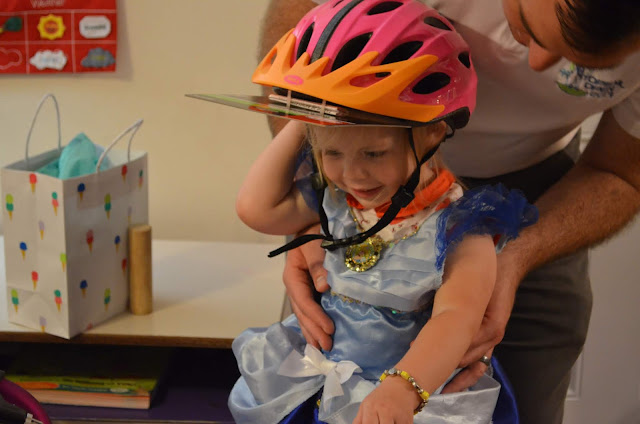 With Evie about to enter second grade I feel us entering a strange phase of life. Since we started having kids it has felt like so much littleness- not always in an overwhelming way, but just the way life was. Everyone was little. But now it feels like I'm standing still and the girls are passing right on by. Audrey will be six in December, when in my mind she's still four!
.............

I made Parker House rolls from scratch for the party and to me it was the biggest feat! Yeast intimidates me something fierce and I didn't read the recipe through before I started.:-/ It was one of those with lots of "add this ingredient at room temperature" and "add only 3/4 of the melted butter" (as I'd dumped most of the two cups in already), so I was so happy they were edible! 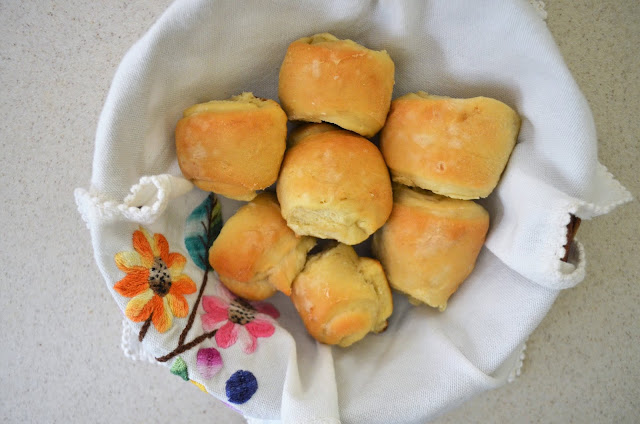 I love this little vintage dress of Cora's and have been wanting to get a photo of her in it, as she's mostly grown out of it already! 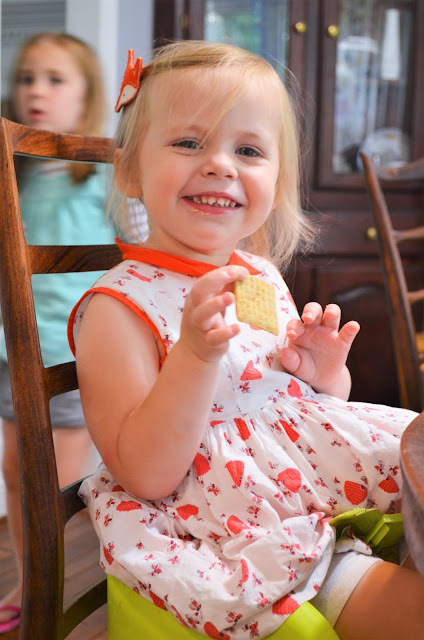 It's hard to tell but it has a cute bees + beehives print.
...............
I've made a few minuscule decor-related changes around the house and am appreciating how even tiny changes make a difference. I've made peace with the fact that substantial transformations such as painting a room or furniture may or may not happen soon or at all. I know it's all about making those things a priority and just pulling the trigger to buy the paint and start, but right now those just aren't top of the list and that's okay.

My first "project" was spray painting the wooden light switch covers by our front door. Our house has so many different covers it's ridiculous- I have never in my life lived in a place with such a random assortment of them! We still have a few wooden ones upstairs but I wanted to see how these turned out first. (I still need to spray them with clear protective gloss.) 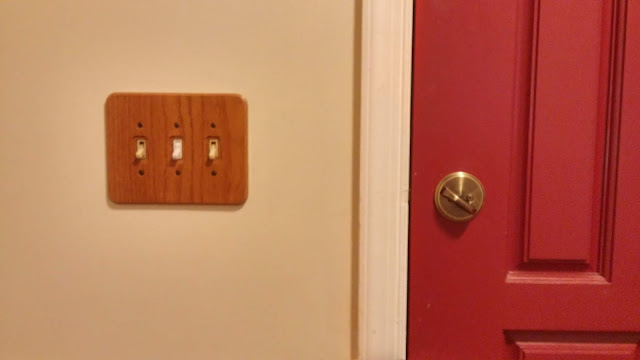 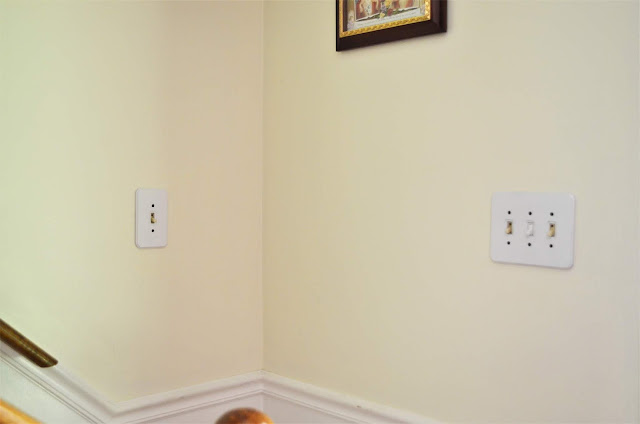 {after}
When I had them outside drying it started raining even though it was sunny!! Thankfully they had been drying for a couple of hours so no harm done. 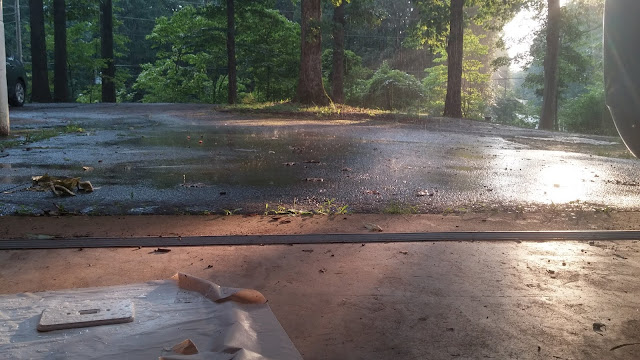 I also had a canvas print made for one of our mantels which I've been wanting to do for ages! BUT I measured the space months ago and thought I knew the right size when I ordered the canvas. It looks okay but definitely could be a bit wider- c'est la vie, right? 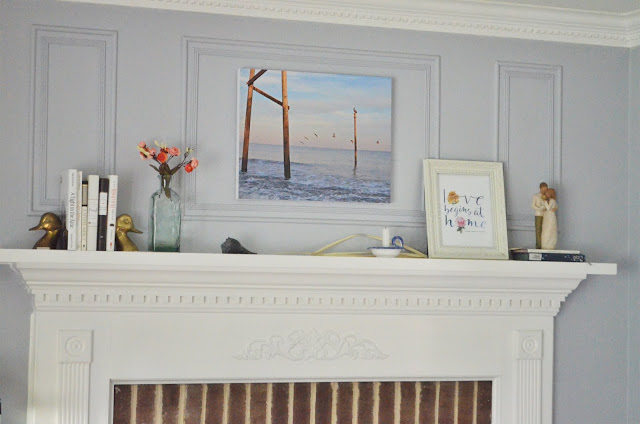 And finally, I have to express my gratitude for screw drivers. I never realized how many things could be solved by tightening screws! We have those builder grade towel + toilet paper holders in our bathroom, you know, the metal kind that always seem to be jiggling and loose and falling apart. Well, I noticed there were tiny screws on the underside and tightening them did the trick! Same for my drying rack that started warping and barely standing upright- just needed almost ever screw tightened. It's the little things!
4 comments: