We had a fun family pumpkin patch outing in October! The girls especially enjoyed the playground and cow train, and Cora was enamored with all the "so big, heavy" pumpkins. We never did get around to carving our pumpkin but we made some good memories. :) 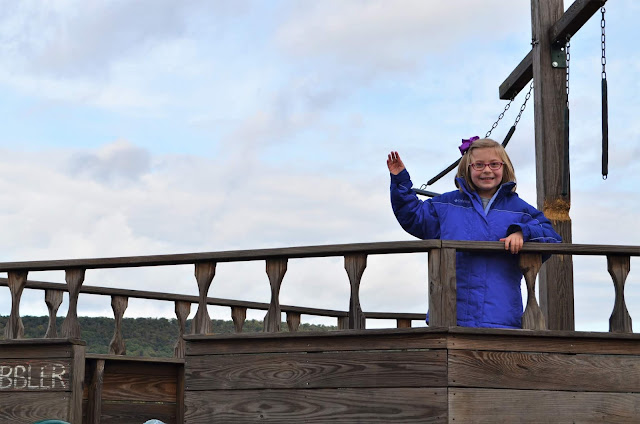 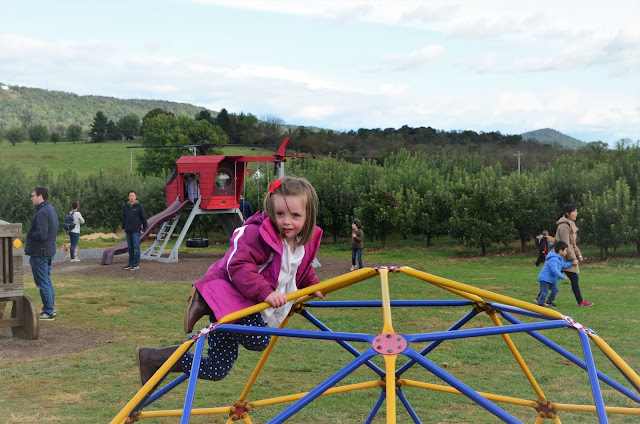 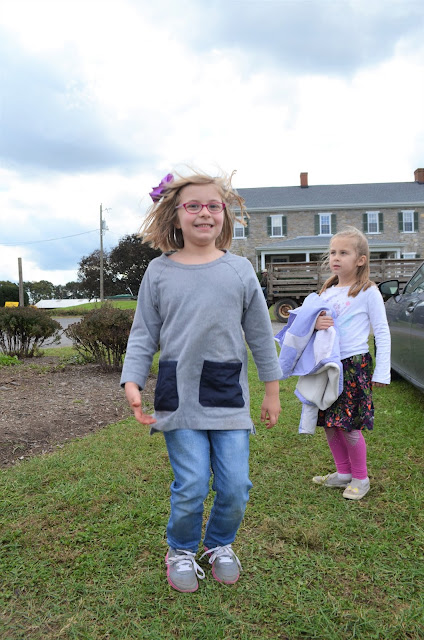 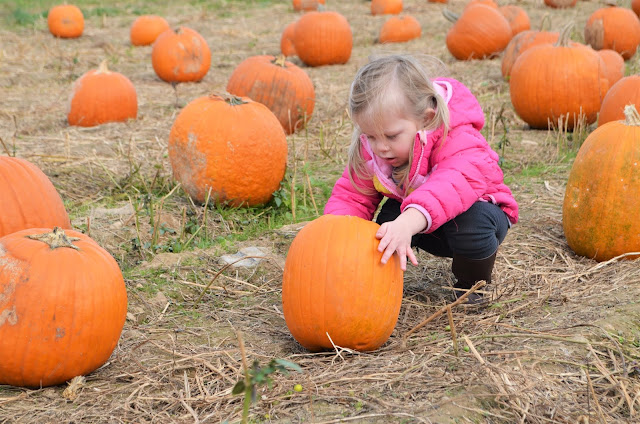 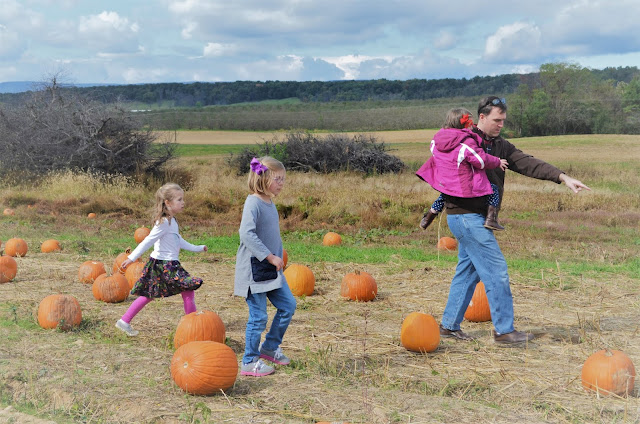 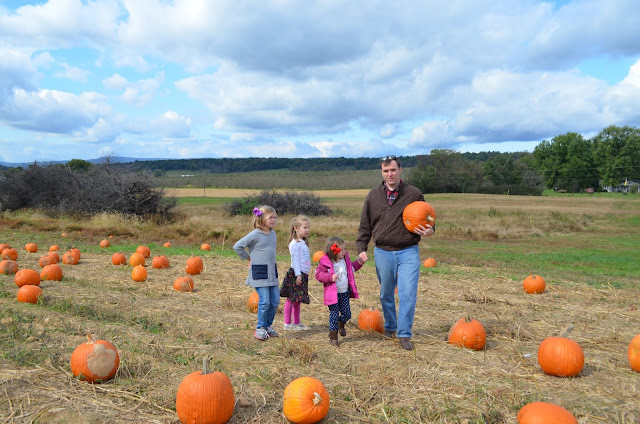 .......
Evie had another ER visit in October for breathing issues. She's had some good weeks but more recently we've been trying to keep on top of her symptoms- prayers appreciated! 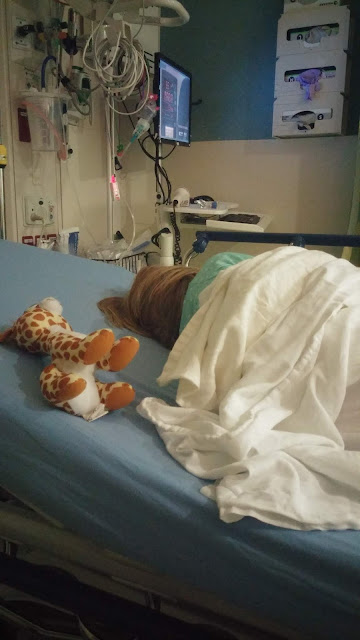 On Halloween Heidi's pre-k class had Storybook Day and she dressed as Olivia. She was a cute little pig, if I do say so myself. :) 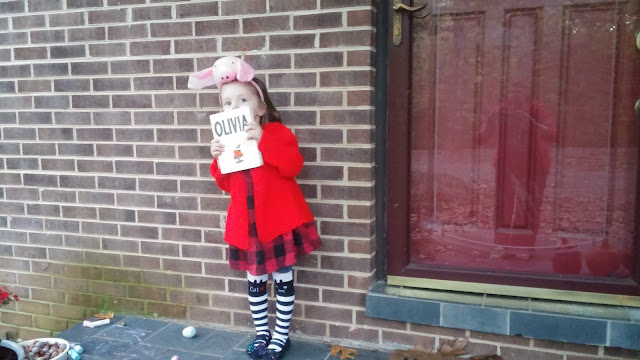 Later that day we went to my parents' for dinner and trick-or-treating with cousins. Evie dressed as a cook (YouTube to the rescue for her hat!), the dress was a lot big on her (my oversight) but Audrey went as Alice in Wonderland, Heidi went as Princess Anna(third year running!), and Cora refused each and every costume option, so subsequently went as a two-year-old. It was a lovely, mild night, and good to see neighbors. 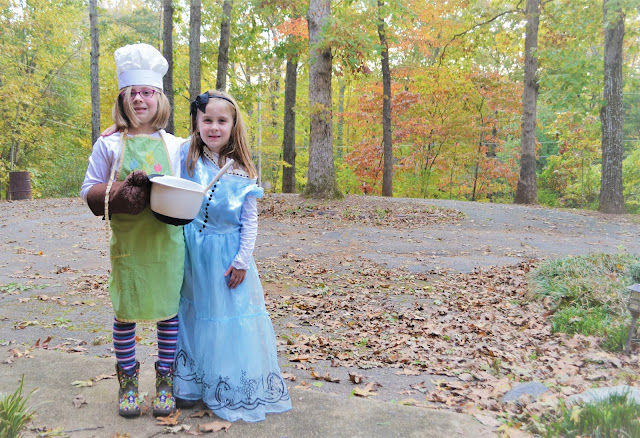 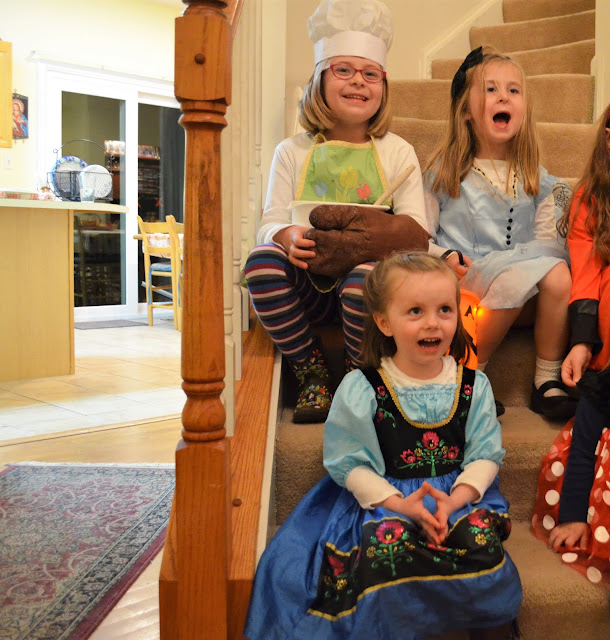 On All Saints' Day we attended mass at the girls' school and then went to Evie's classroom for the 2nd grade Saint presentations.
Halloween through All Souls' Day is always such a special time of year! 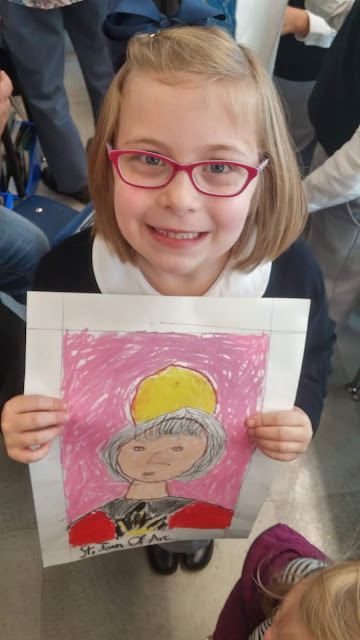 After a hiatus since our beach trip, Cora once again began climbing out of her crib during nap time AND climbing over the gate we put in front of her door. After a few insane days of no-napping, Tim converted her crib into a toddler bed. That ameliorated the situation for a bit but some days she still rebels when I put her down for a nap. I ordered a monkey lock, which my sister told me about, and that has helped! When I need to use it she cries for some minutes and tries to open the door but eventually falls asleep in her bed.
Crazy toddler years! 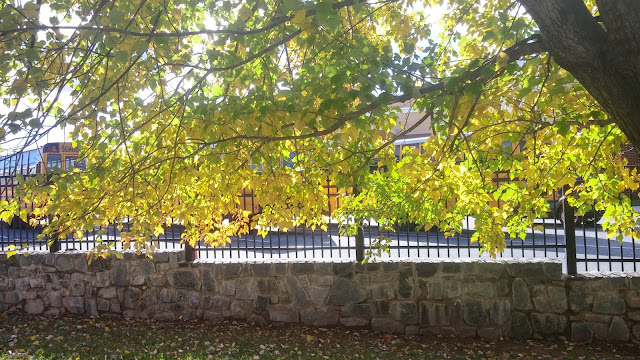 A few weeks ago Tim and I watched the Mr. Rogers documentary.(Side note- I fondly remember watching his show on "channel two six" before PM Kindergarten when I was little.) We both really liked it a lot; there was one remark I thought was very poignant- I can't quite recall the exact words but the interviewee said something like: people feel the need to categorize others into specific categories and when someone doesn't fit in one of those we become suspect of them.

The movie relayed how poorly some people perceived him and his work, and how it affected him. It reminded me SO much of part of a documentary about Hollywood Directors and WWII Tim and I watched that involved Frank Capra. Apparently the initial negative reception of "It's a Wonderful Life" stayed with him until his death, and that breaks my heart!
I just wish I could hug them both, tell them how much they matter, and thank them for their work!

On that note- have a wonderful Thanksgiving!
No comments:

A Moment in the Life

Just gonna lay this one out there... 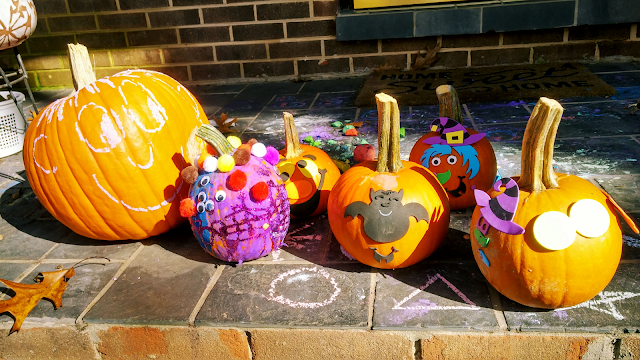 Things you never want to hear your toddler say when they have a stinky diaper:

"Is it, dirty fingers?"
No comments:

Email ThisBlogThis!Share to TwitterShare to FacebookShare to Pinterest
Labels: Momhood

I think my Christmas love language is picture books. I love perusing Christmas book lists and pulling out ours- sometimes bit by bit, some years all at once- when Advent arrives. A few years ago I was a library requesting fiend and used up all the hold space I had for Christmas picture books (um, starting in October). Seriously, though, the whole of December is like Black Friday lines when it comes to certain library Christmas books.
Over the years we've added to our home collection- a handful from Amazon or as gifts, but most through thrift store finds and library book sales, little by little. Another place we've struck gold (usually in the "off" season) has been a large used book store in our area with a specific Holiday section in the kids' area.
.......
I absolutely love Barbara Cooney's illustrations and I feel like you can't go wrong with books illustrated by her. Also, Tomie dePaolo has approximately 1,000 Christmas related books- I feel like his are great for gifts or a great place to start for a home collection.

So, here are our favorites: 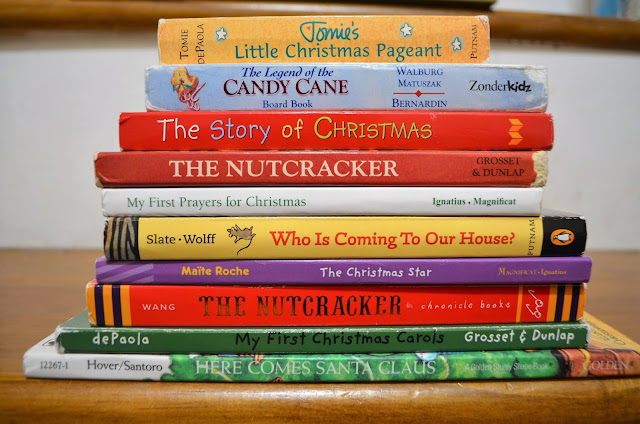 Tomie's Little Christmas Pageant
The Legend of the Candy Cane (abbreviated since it's in board book form)
The Story of Christmas
The Nutcracker  (the BabyLit version also looks great)
My First Prayers for Christmas
Who Is Coming To Our House?
The Christmas Star
The Nutcracker (These needle-felted illustrated books are too cute)
My First Christmas Carols
Here Comes Santa Claus

Not pictured: My First Pictures of Christmas 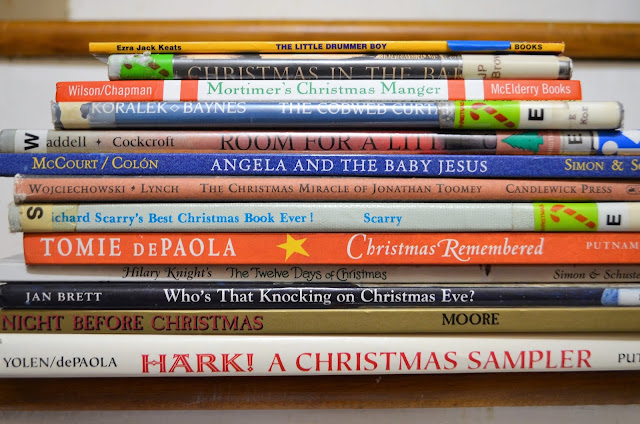 The Little Drummer Boy
Christmas in the Barn (thanks to Ellen who recommended the Barbara Cooney illustrated version a while back!)
Mortimer's Christmas Manger
The Cobweb Curtain (just heard about this last year via Stephanie's instagram and found it for sale at our library)
Room for a Little One
Angela and the Baby Jesus
The Christmas Miracle of Jonathan Toomey
Richard Scarry's Best Christmas Book Ever!
Christmas Remembered
The Twelve Days of Christmas
Who's That Knocking on Christmas Eve?
The Night Before Christmas
Hark! A Christmas Sampler 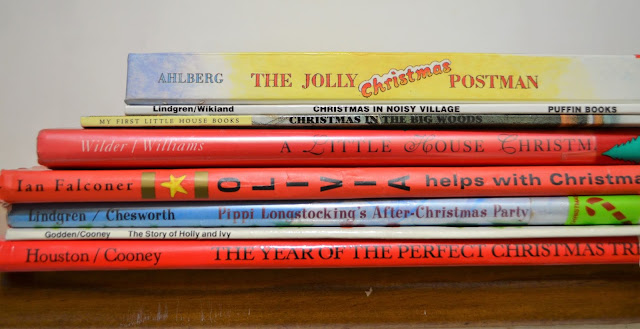 The Jolly Christmas Postman (haha, I found this second hand and kudos to the previous family because it had all the little inserts!)
Christmas in Noisy Village
Christmas in the Big Woods
A Little House Christmas
Olivia Helps with Christmas
Pippi Longstocking's After-Christmas Party

The Friendly Beasts
The Night of Las Posadas
The Legend of the Poinsettia
The Clown of God (can't NOT tear up every time)
The Legend of Old Befana
Country Angel Christmas
Merry Christmas, Strega Nona
Jingle, the Christmas Clown 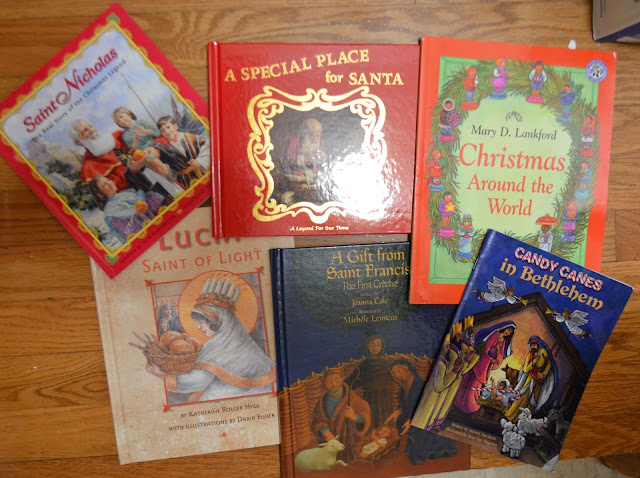 Saint Nicholas (I also love the Demi version)
Lucia Saint of Light
A Special Place for Santa
A Gift from Saint Francis
Christmas Around the World
Candy Canes in Bethlehem (the author was a client of Tim's so she gave us a copy!)


Aaannd that's where we are Christmas book-wise (for now). :)