A First Communion & Other Happenings

Something I forgot to mention in my last post- also in April our power went out for 24 hours! It doesn't sound so horrible typing it out, but having no water, no electricity, and no internet for an entire day really makes life stagnant (you can't really DO anything productive) and unpleasant (no washing, working toilets, opening of fridge). I kept trying to tell myself, "Texas had it much worse!" but it still completely stunk- it also didn't help that the "estimated time of completion" for it being fixed changed multiple times (I much prefer being upfront with worst case scenarios than timelines that are moving goal posts!).

We had had heavy winds and a power pole in our neighborhood snapped in two. The electricity crew had to bring in lines through the woods and other such things which took quite a while. One bright spot was that when we took a family walk down to the site several neighbors we had never met before were congregated there. We all shook hands and talked for several minutes. No distancing or hesitancy on anyone's part- wonderful, normal human interaction.❤

My grandma's 100th birthday would have been in mid-May, so my mom's family organized a meet-up at her grave site. It was so good to see and talk with everyone who could come. Tim stayed home with the girls since we didn't know how strict things would be at Arlington National Cemetery (it ended up only being a hassle to use the bathrooms). 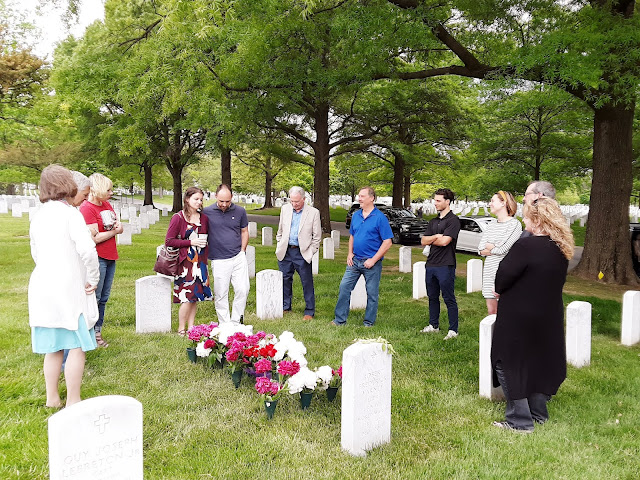 In late May Audrey received her First Holy Communion! It was on the feast of St. Bernadine of Siena which was kind of neat as he's been on our "intercession radar" the last several years for all the respiratory things that come along. 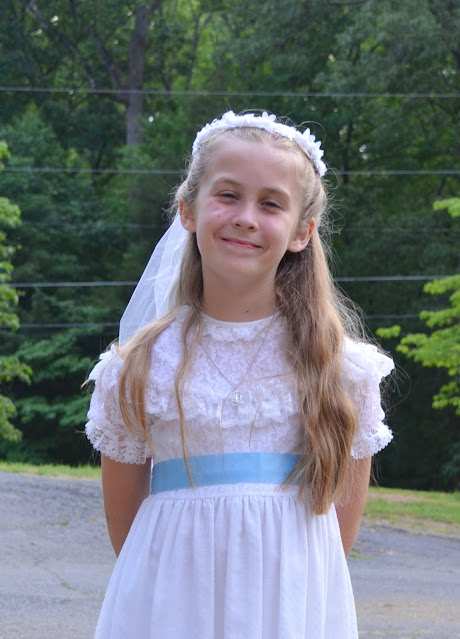 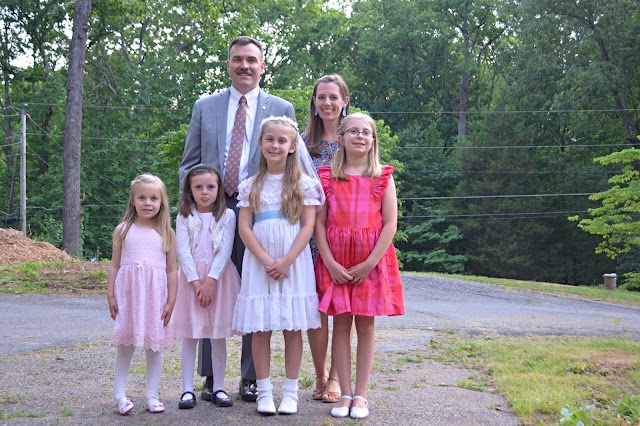 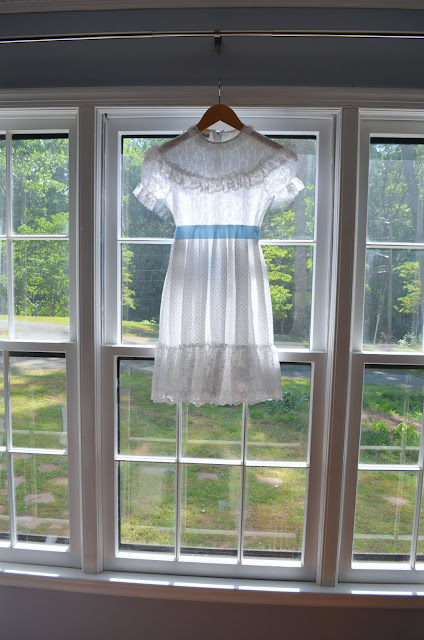 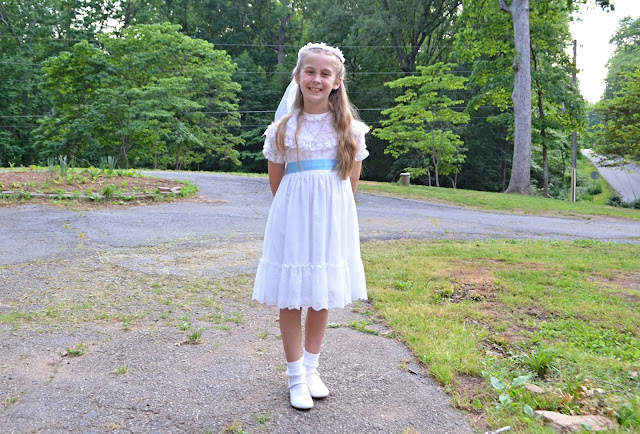 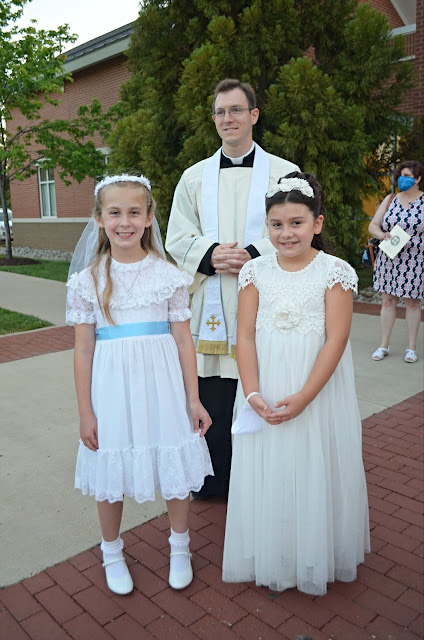 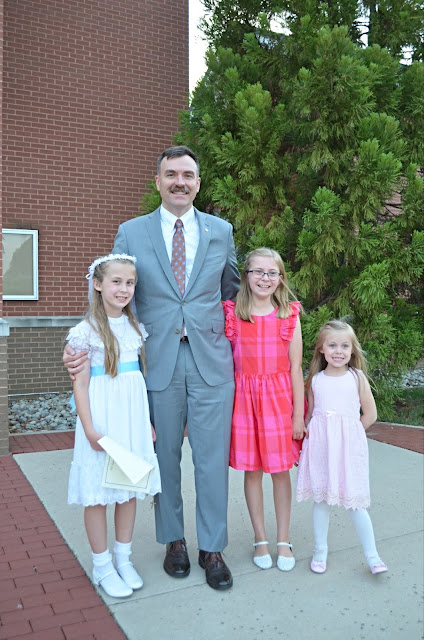 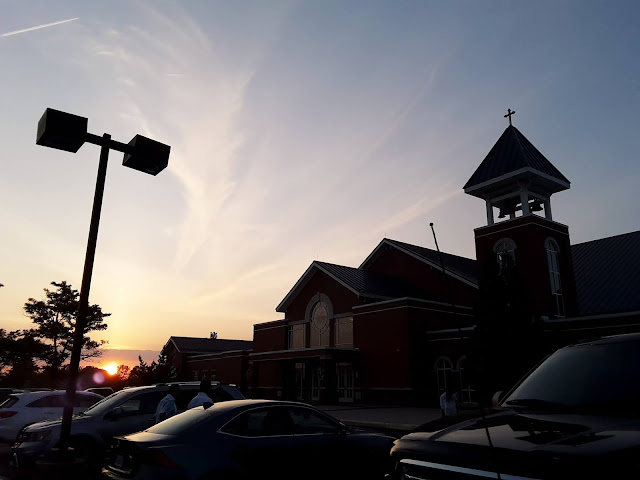 Since it was an evening mass we just had cupcakes afterward as a family and then celebrated with my family the following Sunday with a brunch. 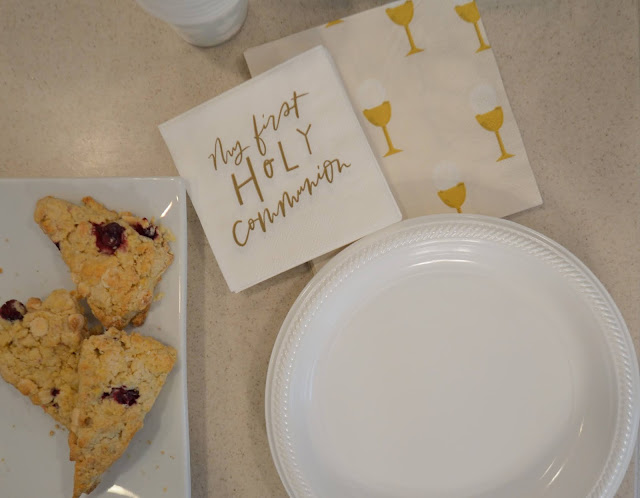 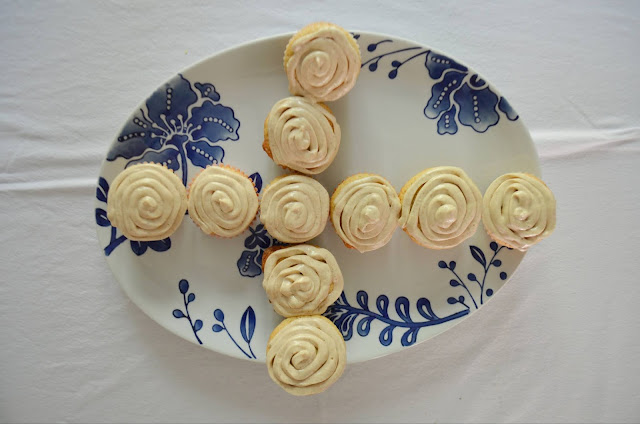 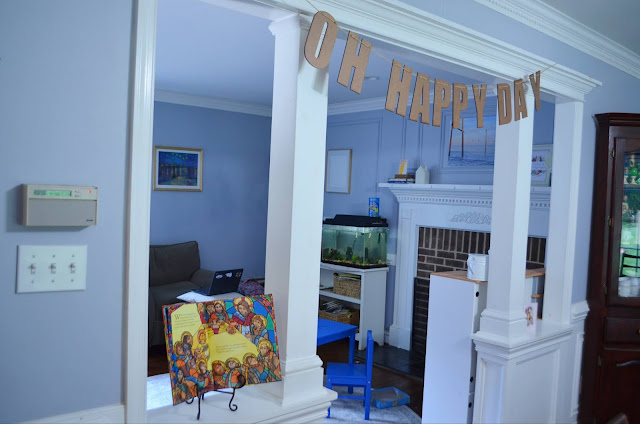 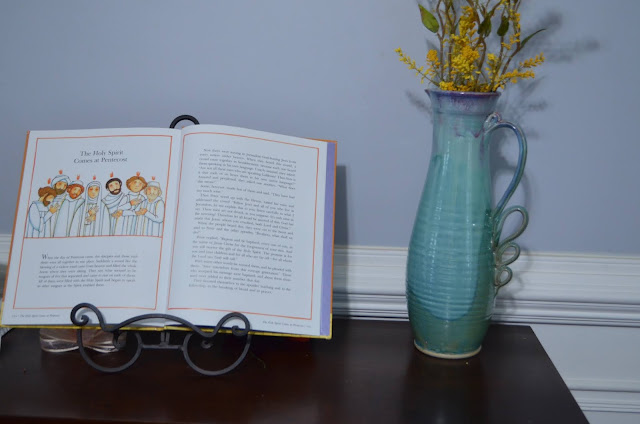 In June the girls finished up school, 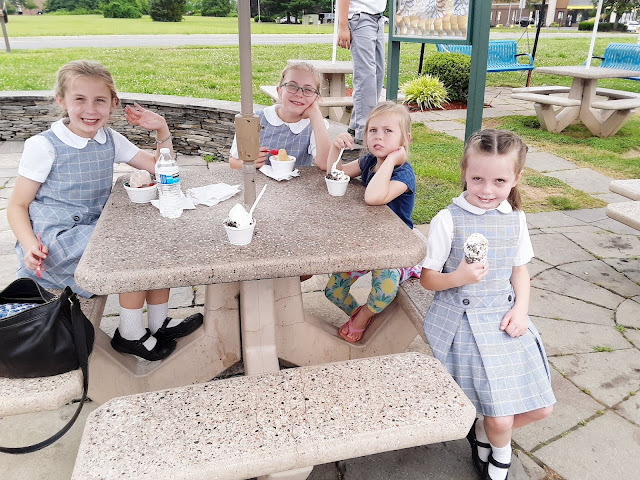 and Cora turned five!
Last year I realized a neat thing about her birthday- she's named for the Sacred Heart and her actual birthday is the same date of the "Great Apparition" of Jesus to St. Margaret Mary ("Behold this heart which has so loved men...").❤
To celebrate we went to a skating rink as a family. The girls kept talking about the climbing/playground apparatus the rink had, so that says everything about how successfully the actual skating went, but fun was had!
Tim made her cake and the older girls enjoyed putting the whipped cream and strawberries on. 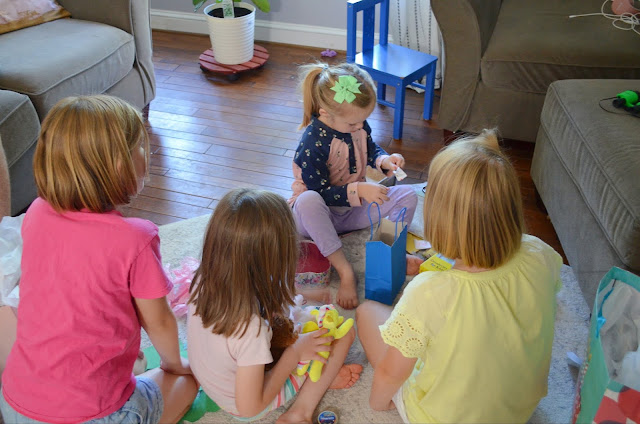 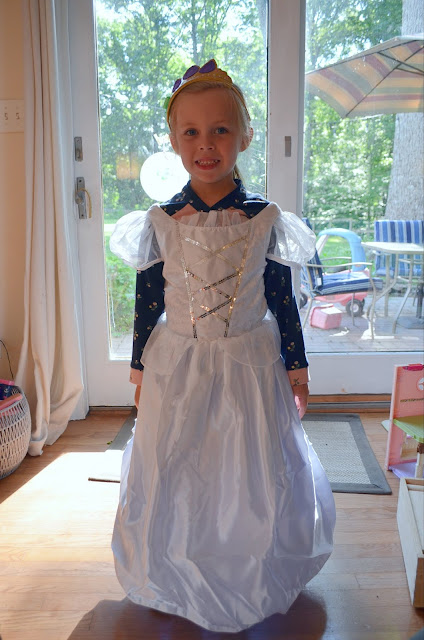 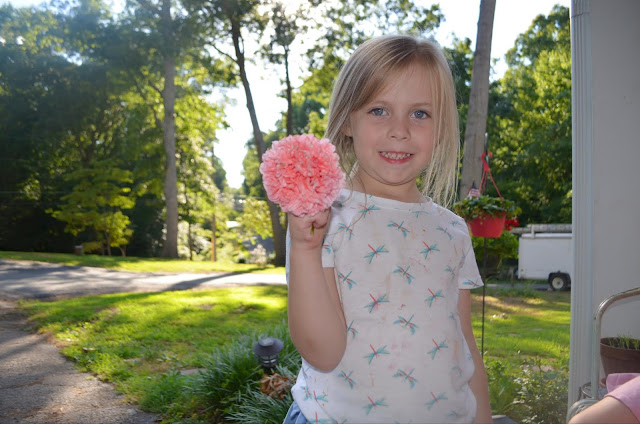 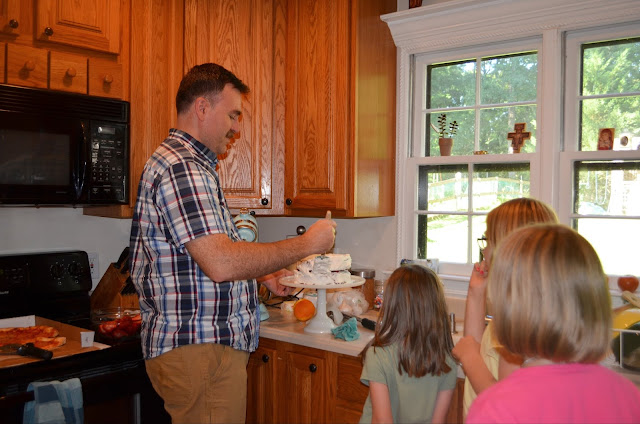 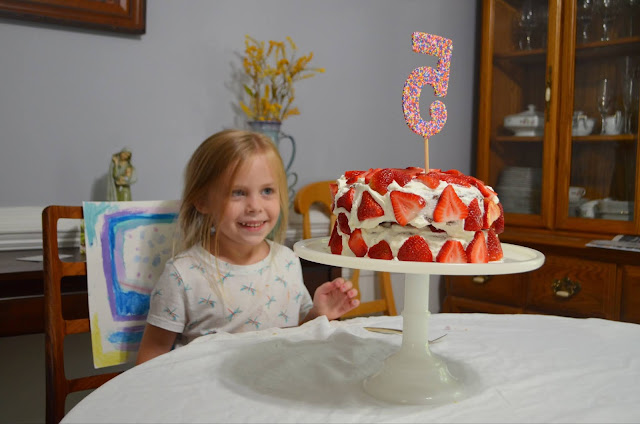 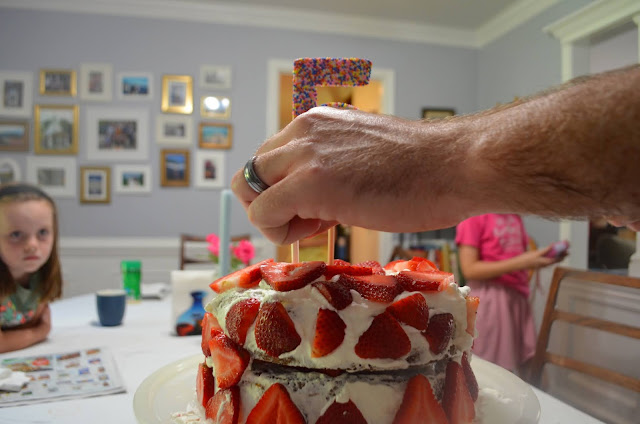 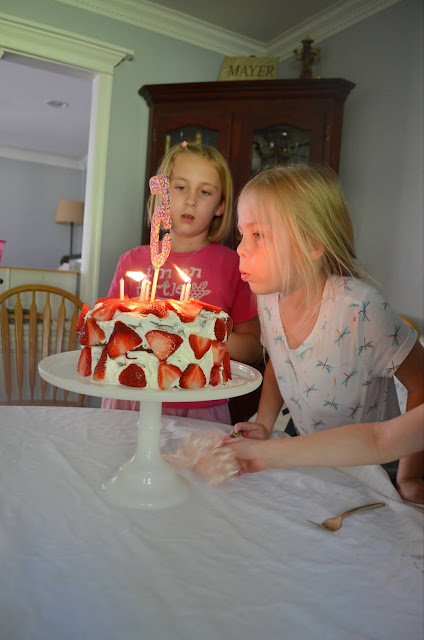 And she used to say "St. Therese of the Zoo" but sadly recently picked up that there's an "L" in there.

.........
Also in June all the girls attended an Irish Dance camp and Vacation Bible School at a local parish. I loved how they were all able to participate together- I'm a bit wistful because it's probably one of the only summers where their ages will align for that to happen! 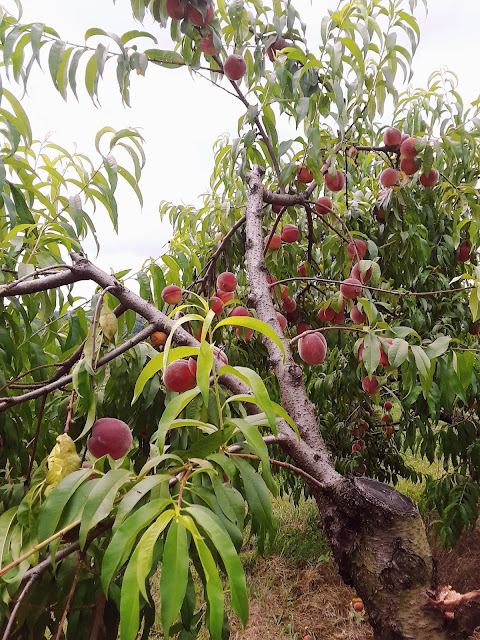 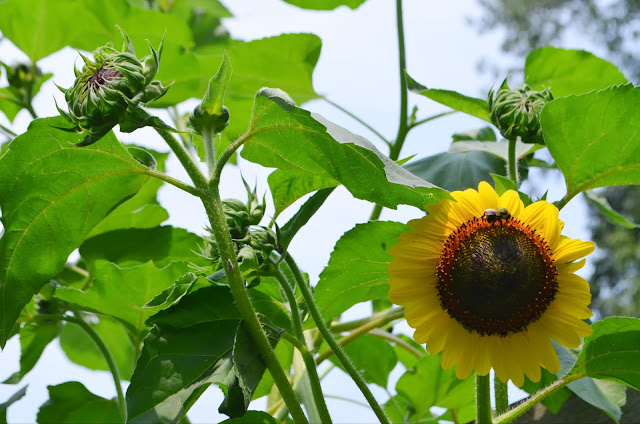 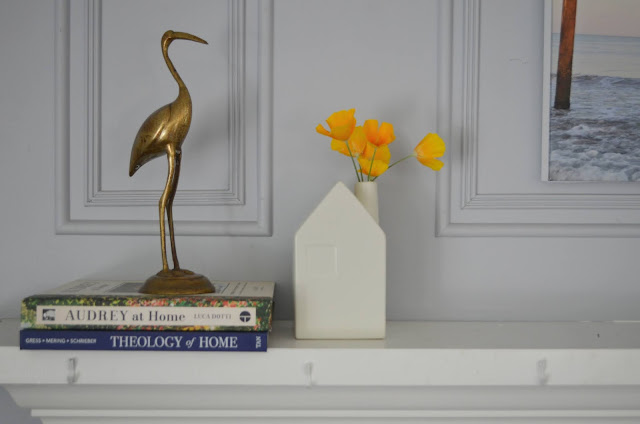 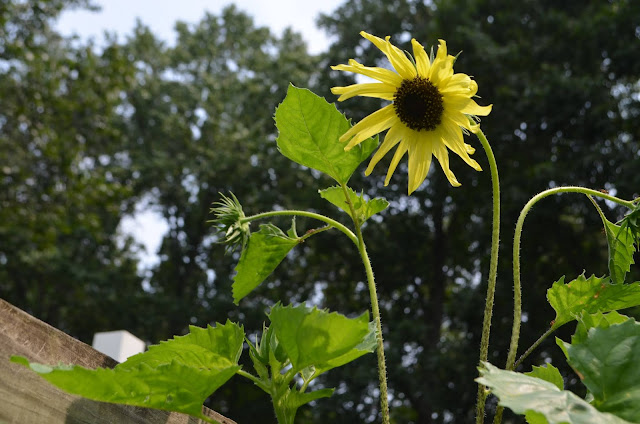 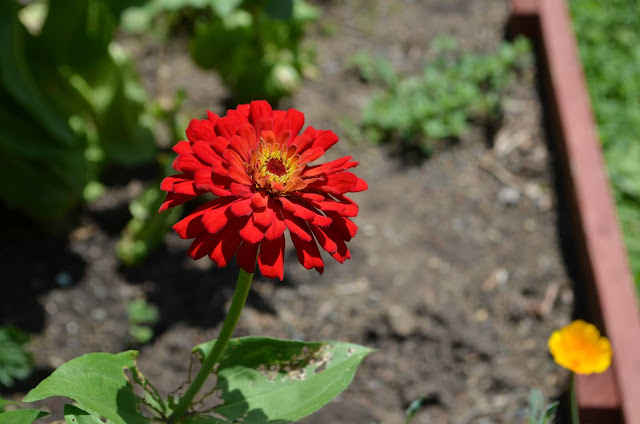 I'll stop there since that's a good bit of updates for one post!
No comments: