[Let me start by saying that I am announcement-averse and that unless you've seen me irl the last several months you didn't miss any pregnancy news on the blog or social media.:) ]

We welcomed sweet Leo on December 18th and there was a lot about his birth that was unique! First boy, first of our babies to arrive early (one day before his due date), and first to weigh under 8 pounds.

Anyway! Let's get down to his birth story. 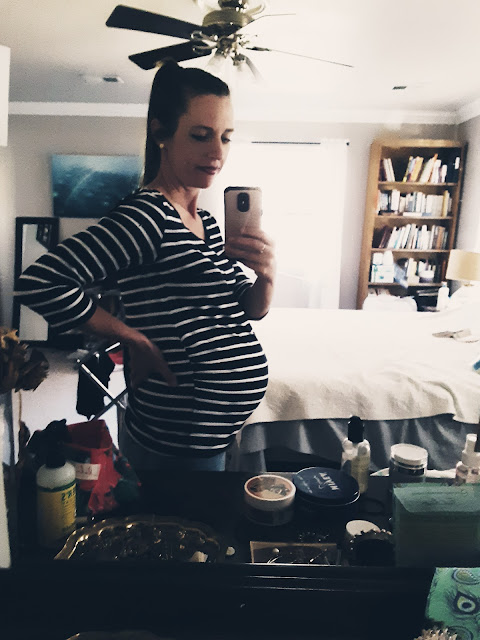 Each of our girls arrived after their due dates, so I had it in my mind that this baby would also arrive late, preferably after Christmas- my due date was the 19th. I really wanted to not be in the hospital for Christmas *and* was set on hosting Christmas Eve at our house, which we've done the past couple of years. (And for the record there is a distinct difference between being overly pregnant and hosting people at your home because you want to and being overly pregnant and hosting at your home when you did not, in fact, choose to do so. But I digress...)

At my most recent ob appointment (Wednesday) the midwife checked me and said I was 3cm dilated, which surprised me a bit because I had never been that progressed at any appointment with the other pregnancies. At any rate the following days I kept on with life and did the things. That Saturday (December 18th) I had a hard time sleeping and woke up at about 3am. I realized I was also having contractions, so I went downstairs and started timing them on an app. They were painful and lasted about 45 seconds to a minute, but were spaced about 10-15 minutes apart. Around 5:30 they fizzled out and I headed back up to bed for a couple of hours while Tim made his weekly much anticipated chocolate chip pancakes & bacon for the girls. That day I stayed around the house, as I was feeling tired and achy. We made it a point to decorate our tree which we had picked out two days before, and that afternoon I finally remembered to take a sentimental albeit cheesy bump photo à la Pinterest pin find of several years ago: 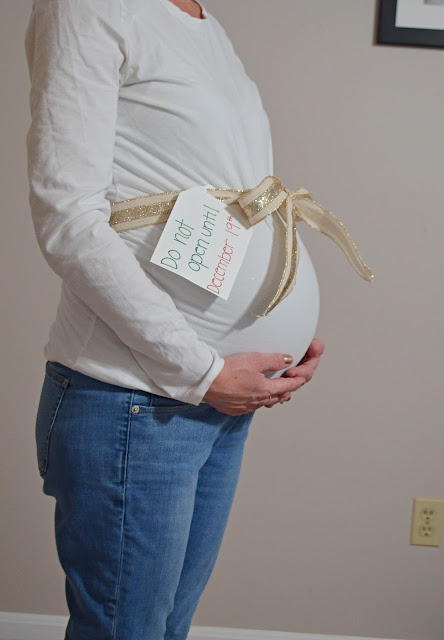 Around 4:30pm the contractions returned. I was not too keen that they had started again because according to my agenda it was too soon, *and* the next day was my birthday, which I was looking forward to celebrating!

I started prepping dinner, which Tim took over when he noticed I was timing contractions again. He encouraged me to call my sister to come over. I was hesitant at first because the hospital we were delivering at this time was at least 35 minutes away and I wasn't sure if this was "it". On the other hand the hospital was at least 35 minutes away and I didn't want to wait too long if this was it...so I placed the call to ask my sister if she could come over and then went upstairs to lie down and call the ob office. And in the interest of multitasking- paint my nails.

After a weird exchange with the office contact person (they seemed confused as to why I (woman in labor) was trying to contact the OB/Gyn on-call (pls tell Dr. baby is coming.)), I got in touch with the doctor on-call who was very matter of fact, which I appreciated! He asked me several questions and then told me it was up to me if I wanted to head to the hospital now or wait. He also said it was highly likely I would be heading there that night. I decided to wait it out for a little and he let me know he would notify the hospital that I might be coming and that I wouldn't have to call back if/when I did go in.

When my sister got to our house she came up to talk to me- I was apologetic about interrupting her evening and a bit emotional about the baby coming already (I was sure at this point due to bloody show). She assured me she didn't mind and that there would still be several days to recover before Christmas and it was all okay- sisters are good like that.

Not long after her arrival I finished packing my hospital bag and Tim and I scooted out the door. Once we were on the road the contractions increased to two to two and a half minutes apart. Suddenly I regretted waiting to head to the hospital as I forgot to factor in the reality that red lights and other (slow!) vehicles exist and they do not to yield to cars bearing women in labor.

As we made our way to the hospital I was grappling with surreal realization that this baby was coming. It's intimidating to know the arrival of a new family member is imminent and not know one thing about them! (We hadn't found out the gender.) On my discharge paperwork there was a Bible verse listed which describes everything so well:

"When a woman is about to give birth, she is sad because her hour of suffering has come: but when the baby is born, she forgets her suffering, because she is happy that a baby has been born into the world." John 16:21

When we arrived at the hospital (around 7pm) Tim was able to leave the car at the front entrance while he wheeled me up to L&D (huge perk of weekend + off-hours hospital run!). We waited several minutes before being taken back and then the nurse stated she would take me to triage, "Unless you think you're in labor?"

While they started to admit me Tim ran down to move the car. Not long after the nurse checked me and said I was 6cm- better than nothing but I had kinda thought I might be further along, and it left Tim and I wondering if this baby would arrive in time to have his/her own birthday or share one with me and my nephew!

I'm a bit fuzzy on the rest of the timeline/ details..sometime thereafter Tim asked me what I wanted for a boy name. We had already settled on a name for a girl but just had no definitive "front-runners" for a male appellation. Drained at the thought of picking a first name and then wading through the myriad options for middle names (you know, like the unique family, saint, or significant names you wouldn't consider for a first but definitely would use for a middle) I told Tim I would defer to him. He came back with, "How about Leo Jude?" and I readily agreed.

My doctor came in at some point to see how I was doing and then around 8:30 the anesthesiologist provided a lovely epidural. A short time later my nurse let me know she could see my bag of waters...not quite something you hear everyday! Tim and I had a little window of down time together and then I felt a gush- He notified the staff my water broke (first time on their own for me), everyone came back in the room and we were told it was go time. I pushed a couple of times, someone mentioned the baby had a head of hair (another surreal moment, as they could see his head but we still didn't know boy or girl!), I pushed a few more times and then Tim declared, "It's a boy!". Sweet Leo Jude was born at 9:22pm, 7lbs 13oz, 21 1/2 inches. I was honestly shocked that we had a son! We were discharged Monday afternoon and not a moment to soon as the girls weren't able to visit the hospital; they were finally able to meet him when they arrived home from school that day.

We all love him so much and his four big sisters are quite proud.:) 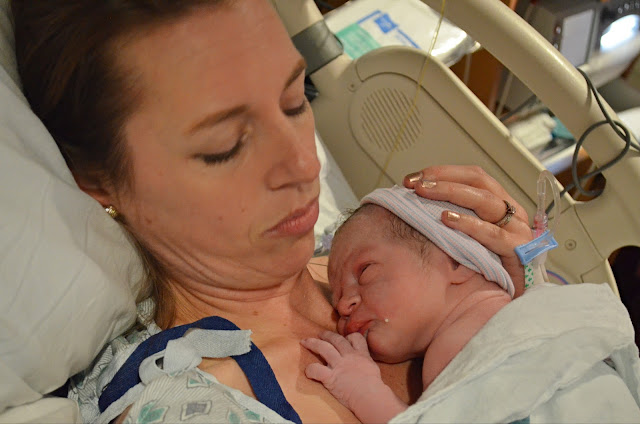 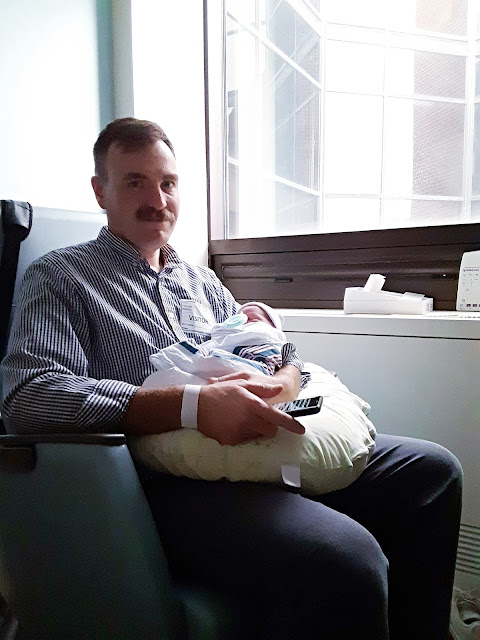 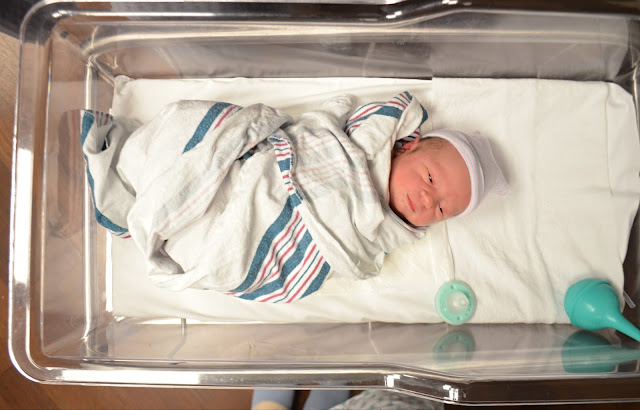 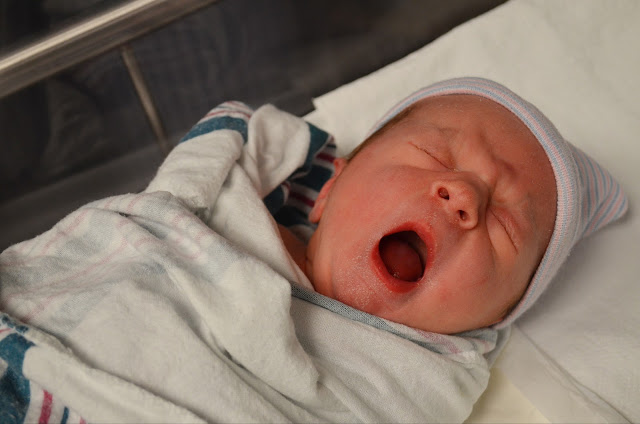 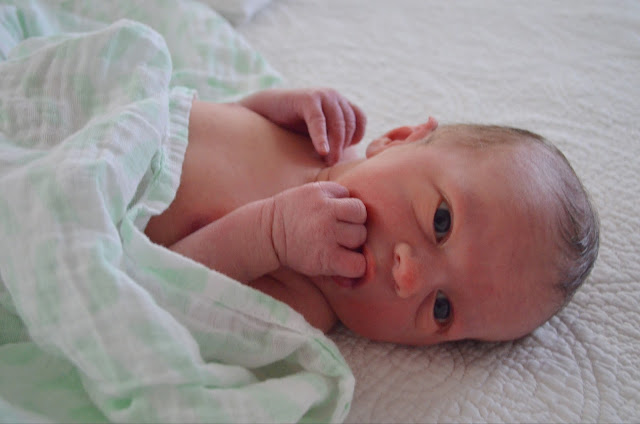 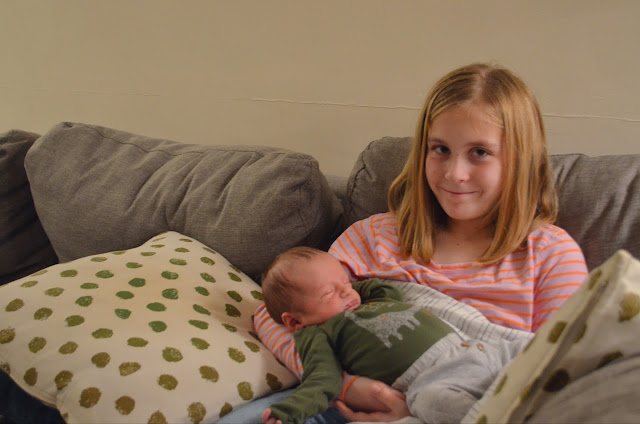 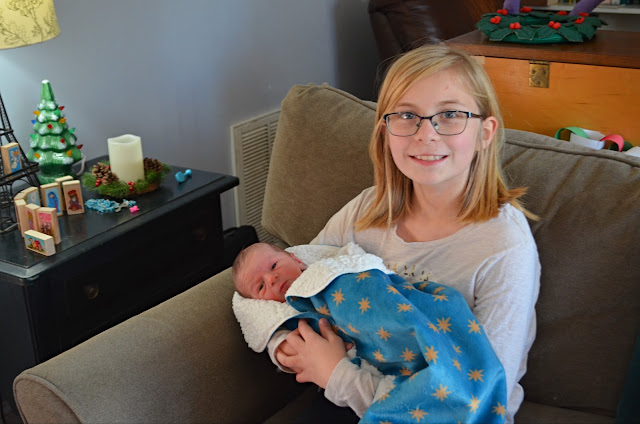 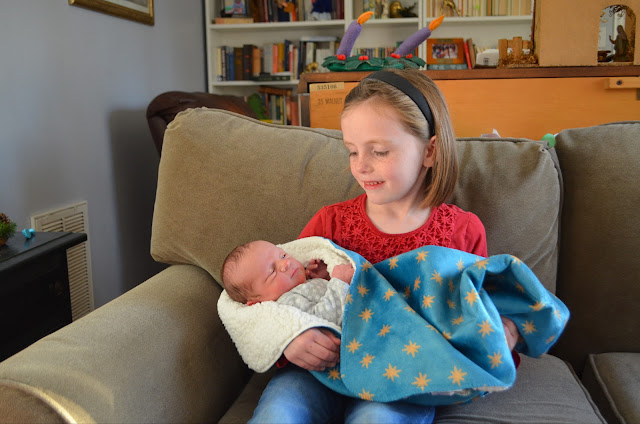 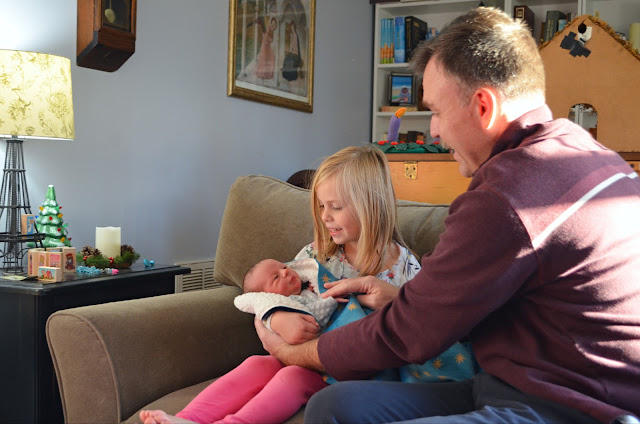 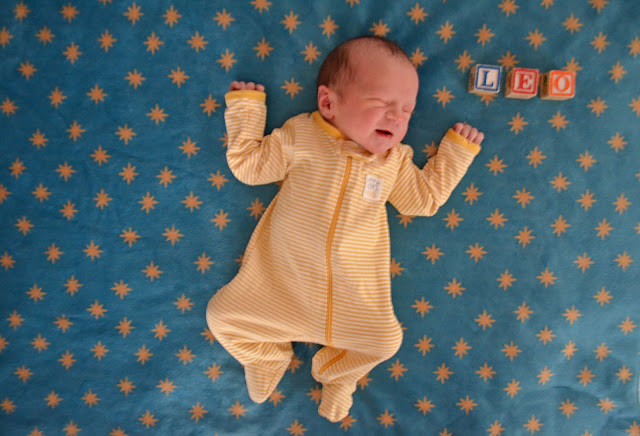 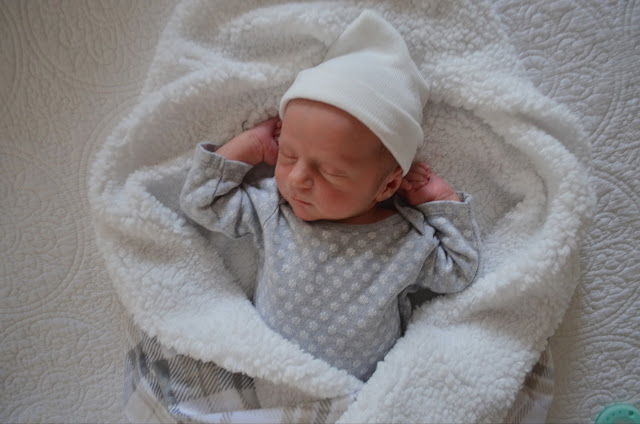 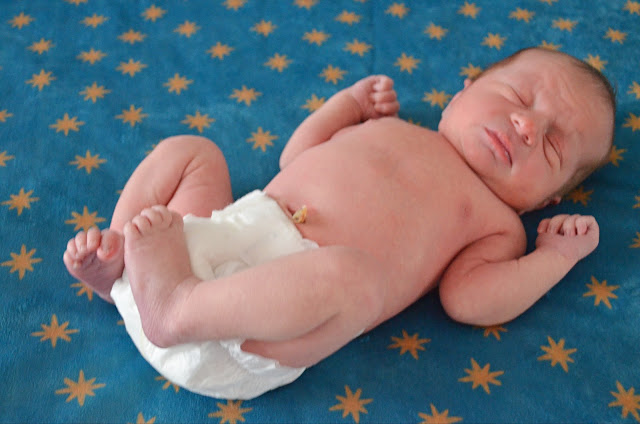